Hello, and welcome to this month's issue of Upcoming Games. As stated in my Notes for the Pipe Plaza, this will be the first UG issue written for the Main Team, after it was moved from the Pipe Plaza team a few days before the release of Issue LXXVIII. However, as in Mario Calendar, the section will retain its usual format, which means it'll cover the latest news on the upcoming Mario-related games. 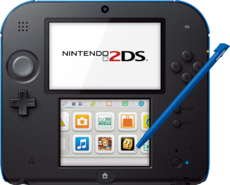 There was plenty of interesting Mario-related and Nintendo news in the past two months, so let's take a look at those announcements!

The most important piece of news was the announcement, on August 28th, of a new handheld in the 3DS line, the Nintendo 2DS. The 2DS features a sturdier design, rather than the clamshell design from the DS line, the 3DS and the 3DS XL. Additionally, as the system is aimed at children younger than seven years old, it will not be able to play games in 3D; however, aside from that, the 2DS will have all the functionality from the other 3DS models. The Nintendo 2DS will be released in all regions on October 12th.

In the software realm, Nintendo unveiled the release date for many previously announced games. Super Mario 3D World and Mario Party: Island Tour (which was confirmed as the official name for the 3DS Mario Party) will be released for the Wii U and the Nintendo 3DS, respectively, in North America, Europe and Australia in November, and in Japan in December. Mario & Sonic at the Sochi 2014 Olympic Winter Games will be released in North America and Europe before the end of the year, while Donkey Kong Country: Tropical Freeze will hit shelves all around the world in December.

On the other hand, a few games were released since the last Upcoming Games issue: the main one is Mario & Luigi: Dream Team, released in Europe, Australia and Japan in July, and in North America last month. Other titles include new Virtual Console additions, both for the Nintendo 3DS and for the Wii U. A total of seven classic games have been released in the Nintendo eShop during the past two months: Donkey Kong (NES), Mario Golf (GBC), Super Mario Bros. 2 (NES) and Wario Land 3 (GBC) were released for the 3DS Virtual Console, while the Wii U got Donkey Kong (NES), Donkey Kong Jr. (NES), Super Mario Bros. (NES) and Super Mario Bros.: The Lost Levels (NES).

Moving away a little bit from the Mario series, two new characters have been confirmed to appear in the upcoming Super Smash Bros. title, to be released for the Nintendo 3DS and the Wii U next year. Those characters are none other than Mario's little bro, Luigi, and everyone's favourite damsel-in-distress, Peach!

Well, I guess that concludes this issue of Upcoming Games! I hope you liked it!! See you in November!!