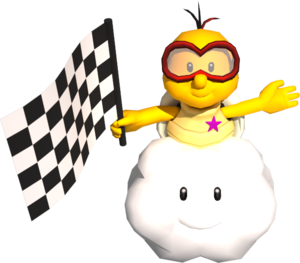 Hello folks. Depending on what time it is when you read this, good morning, good afternoon, good evening or what are you doing here, go to sleep.

I've been asked to do a Guest Section for The 'Shroom, discussing my Mario Kart 7 Tournament. Well, let me tell about it.

My plans around it started last year already, though then just in thoughts. I wanted to make a kind of HUB also, but that didn't really came to a start. I have a few files, but they aren't usable.

I originally planned have achievements like being in first for at least 90% of the race or being last for at least 80% of the race, ideas that disappeared quickly. I also had achievements for being a full lap ahead of the rest, and getting every item during the Tournament. The full lap wasn't achieved by anyone, all items neither, because only I got Thunderbolts (I was in as referee, and was in last all the time [on purpose {yes really}]).
I also had every Group race in it's own Community, to avoid joining the wrong Community at the wrong time. This also helps to see the results from the Community afterwards. Well, until I deleted the Community of course. Bah, I've taken pictures anyway.
Finally I made the Groups and times based on where the players live. This resulted in a little less sleep on my side, but it was worth it. It was rare for people not to appear, the organisation was well.

I had Pyro (talk) as a co-host. While we had talk together in our QuickTopic at first, eventually he wasn't really present at that, leaving me with the work. He was present during the races, but well, I did the recording and administration. He's a nice guy, but he kinda drifted away.
He did give a couple of idea's for achievements though.
He also had the idea of a 'losers bracket', where players that lose go to. They then could try and get a few more points. This idea got scrapped, because it didn't make a lot of sense, and losing, then losing again would be frustrating.

Then the actual sign-ups got up. I got 20 at first, however a few had to back off. Luckily I got one extra player after that.
I was prepared for the fact that there probably where people from all over the globe, and I was right. United States, Australia, a few European countries, etc. Nice distribution.

At a certain point in time (3 July to be exact), the host of the Team Fortress 2 Tournament asked whether it was possible to move the game a week early. This worked out, so we changed.
After I published my schedule, containing 4 Groups, there where a few people falling out, or not available at specified times. This even resulted in one Group disappearing and the players in it being distributed to the remaining three. After some shuffling, things were arranged.

Second round. After a few shuffling with the players, we could start.
First Group. Another storm of connecting errors. Results.
Second Group. Connecting was better again. .stluseR

The Finals. I could link to the results again, and I do, but I will also write it here. After some waiting for some people, and the race, the winner became Cirdec! Second came Turboo, and shared third came Randombob-omb4761 and SKmarioman! I congratulate everyone once more.

Well, that was it for this year. I hope you enjoyed the Awards and everything related, including Awards Mafia III, the TF2 Tournament, the Minecraft Games, and everything else. Arigato for playing.

I'm planning on doing a Mario Kart 8 Tournament next year. Don't miss it!