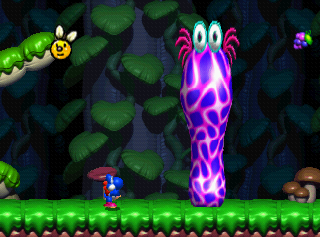 How my heart doth fawn for the days now gone in the dark, grassy jungle predawn with the one and only... Neuron!

Neuron, soft and squishy, Yoshi took him for a ride. By that I could abide, although at times it did smell fishy... Ok enough rhyming. It's been fourteen years since last we've seen the Neurons in that pitch-black, perilous jungle in Yoshi's Story. I long to see these splendid creatures just once more. And I'm drawn to go back to Neuron Jungle. I'm not sure what Neurons are... They are long, squishy creatures with googly-eyes and multi-colored hair. They even came in four Yoshi colors: red, pink, yellow, and cyan and with various colored dots. They were necessary to reaching certain high-up platforms and Fruit.

But they weren't all useful... The Neurons, though well meaning, often got in the Baby Yoshi's way. For example, two Neurons side-by-side blocked a Special Heart and either of them needed to be ground-pounded in order to get it. They moved diagonally from right to left, or vertically, helping or hurting the Yoshi depending or where they were, even sometimes causing their death by falling into the windy bottomless pit. I believe they were all well intentioned. But sometimes the road to having to be rescued by a White Shy Guy is paved with good intentions. They do make a funny noise frequently, and it's debated what they are saying, but it always sounded to me like they were saying their name, "Neuron! Neuron!"

I never understood the lyrics to their level. I tried to sing it in school and one of my classmates thought I was singing about "tacos". It does kind of sound like "tacos" now doesn't it?

We have not seen the Neurons in fourteen years, and soon it will be fifteen, and I don't think we'll be seeing them before then. No, like many other creatures and characters from the marvelous but much maligned game of old, we have seen the last of them. Neurons, soft and squishy, have faded into obscurity.