Warning – This page contains harsh language, vulgar content, spoilers. If you are offended by such materials, turn back now while you still can.

It seems Activision have a very skewered image of what Special Forces divisions are actually supposed to do in times of national crisis; maybe I'm just ignorant, but it seems to me that any government-funded U.S. military branch, no matter how super special secret and privileged, would want to limit civilian casualties as much as possible regardless of the circumstances surrounding the disaster less they be charged for war crimes, at least when good ol' fashioned American civilians are concerned. In Prototype, they try really, really hard to paint the U.S. military as complete amoral assholes dedicated to the oppression and genocide of anyone without a gun taped to their pelvis, to the point where 'cartoonishly evil' doesn't even come close to cutting it; but then, no sane government would fund a bioweapons project capable of turning any odd person on the streets into immortal god-like killing machines with their free will still in-tact, so I guess we can pin all this down to the storywriters being completely pissed.

So for those of you not in the know, Prototype was a supervillain sandbox with an interesting premise that failed to elevate anywhere beyond being a simple murder frenzy – a very fun one, mind. It was frequently compared to another supervillain sandbox released around the same time titled inFamous, but I've always felt more of an affinity towards the scruffy-voiced walking tesla coil due to better narrative and coherent characterization, two very important facets Prototype sorely lacked. As nonsensical as the morals choice system was in inFamous, it at least gave Cole McGrath some semblance of consistency with his personality, whereas Prototype dedicates many of its cutscenes and dialogue into depicting the protagonist as a misunderstood, semi-benevolent good guy forced to do bad things for the greater good, despite gameplay allowing you to slaughter thousands of innocent civilians with little consequences for no better reason than it being hilarious. Lo and behold, the sequel is more of that and then some! 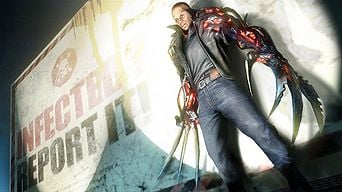 Our wonderful protagonist, who you will likely grow to detest by the time the first act is over.

It's been fourteen months since the virus outbreak in the first game and Manhattan's looking pretty good for a city left in absolute shambles but who cares about consistency, am I right? We get to step into the shoes of a new walking biohazard named James Heller, a grumpy soldier with hilariously inappropriate "smack talk", who sets out to take vengeance on the protagonist of the original game, Alex Mercer, for unleashing the virus in the first place thus inadvertently killing his wife and child. But things don't go so well when Mercer infects Heller thus granting him Mercer's abilities, all part of his grand plan to spread the virus and create a new race of "Evolved" beings. Of course Heller doesn't go along with Mercer's ambitions and instead uses his powers to fuck everything up, a lesson to all omnivorous viral supervillains to not give god-like powers to people that hate your guts.

Not that the plot made any sort of sense to begin with, resembling a jumbled conspiracy wall more than anything else. It's never really explained how they managed to stop the first outbreak or how the second outbreak managed to occur, and I fail to see the purpose behind Mercer enlisting selected Blackwatch and Gentek bigwigs as his mutated subordinates to get intelligence and tear the organizations down "peacefully" from the inside when he's depicted as a laughably evil cartoon villain; he doesn’t even need their help, considering he's basically a god. This makes the entire goal of killing Mercer even more ridiculous, conveniently ignoring the big twist in the last game that he was really the virus itself all along and not just an infected human, even showing at the climax that he can restore himself so long as there's some semblance of the virus still left. And there's still the matter of Heller's moral indignation; effort is put into characterizing him as more sympathetic and benevolent to the squishy mortals than Mercer was, but when he's throwing buses at civilians left and right it comes across as very insincere and like he has split personality disorder or something, which is just as well because everything else in this bloody game is schizo as well. There's one overblown scene where he prepares to kill the Blackwatch colonel once and for all to find out the whereabouts of his daughter (who turns out to be alive, by the way), but decides to spare him upon overhearing that he has a wife and daughter whom he hopes to return to when the New York crisis is over; what about the families of the seven hundred thousand soldiers you killed to get to this colonel, you hypocritical fucking prick? I don't think "they didn't call you while I was readying myself to disembowel them alive and eat them cell by cell, so I didn't know" would ease their mourning. 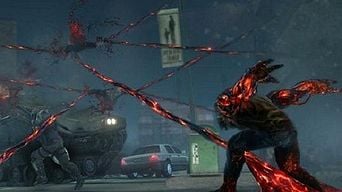 OK yeah, the Tendrils may not be much but they are still really cool.

The story just really bugged me in particular because so much of the gameplay is just fluff, having not really changed much from the original. The difference between Heller and Mercer is purely cosmetic, as you still run and glide around a large sandbox to reach the marked objective on your mini-map – killing everything along the way – and spend those missions either infiltrating military bases, slaughtering them and their infected experiments, or some combination of both. Say what you want about inFamous 2's lack of gameplay evolution, at least there was a whole new well of powers to use; Prototype 2 instead settles for slightly tweaked versions of the powers from the original game, the only glaring innovation being that they've introduced a grand total of one new power-up! Save some ideas for the next game, mates! Your friend could swap out the disc for Prototype 1 while you weren't looking and you probably wouldn't be able to tell the difference, except that the combat all of a sudden feels right.

See, while nothing has really been added, I wouldn't dismiss the game as having no amount of fresh appeal because the developers have significantly improved the flow of combat; I especially like how you can now equip two powers at a time as primary and secondary attacks rather than having to manually switch between each power amidst a swarm of armoured tanks and ravenous mutants. New abilities are granted to you only gradually as the game progresses rather than all being piled on you within the first quarter, so unlike the original I found myself actually using all the attacks instead of just the overpowered Whipfist technique, which in this is granted to you only very, very late in the game. Even travelling feels smooth and natural, even better when you glide above a group of pasty scientists and come crashing down on them with giant hammer fists to give new meaning to the phrase "hammer time". And while not a particularly useful bonus skill, being able to plant a "BioBomb" in an unsuspecting soldier and watching him scream in terror as he explodes into a mess of tendrils killing everyone around him is more entertaining to me than my sanity really should allow.

The upgrade system has had somewhat of a makeover, certainly for the better; rather than manually upgrading powers at your own leisure a la God of War, now experience gained from completing missions, eating important personnel, or just killing people indiscriminately is automatically pooled into a single level up bar so Heller can evolve and gain new skills of your choosing like Pokèmon for sociopaths. It feels more balanced and like the developers actually cared to put some order into the disorganized nightmare that was the first game's skills menu; you even upgrade your powers by actually using them, I can't believe they didn't do that in the first place. What is still a bother are the side missions, which continue to maintain the issue of resembling tedious mini games rather than legitimate add-ons to the story, which is annoying because completing these missions are the only ways to get the optional stats bonuses. I question the training regimen of Blackwatch when their soldiers simply stand around in patterns waiting for Heller to come crashing down on them like he's playing supervillain bowling. Some of the rewards get really obtuse, too; how the fuck does racing across the rooftops to pick up intel improve Heller's defensive qualities? 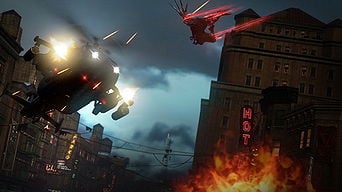 This should be extremely fun for anyone, no matter who they are. Because honestly, fuck helicopters.

But really, I'm nitpicking at this point; there's still a tremendous amount of sandbox fun to be had from latching on to a helicopter five yards away, hijacking it, and then shooting all the squishy soldiers on the ground before they realise what the fuck. I've said before in my Skyward Sword review that I don't mind developers making a largely similar sequel so long as it's used to correct all the bad design choices from the first game, and while there was certainly more Prototype 2 could've done to differentiate itself from its predecessor, I'll still give it a thumbs up for at least being more refined, balanced and flowing a bit nicer. If the game just had more to show for its three year development, took itself a little less seriously, and tried to make the story actually make some degree of sense, then I might've touted it as one of the best games of the year, but like its predecessor it fails to elevate anywhere beyond being an unintentionally hilarious if not mildly annoying murder playground. But you know, maybe that's enough these days; I'm sure I would've felt more engaged in Modern Warfare 3 if they gave me the option to drop the SMG and just start throwing tanks at perpetually screaming Russians.