by My Bloody Valentine (talk)

G'day there, mates. Felt that since this is my first real article for the ‘Shroom (not counting all that Upcoming Games BS I did a few years ago), I should introduce myself a wee bit. I be My Bloody Valentine, formerly Black Hole Sun, even more formerly Pokemon DP; many know me as a four-year veteran who threw one too many hissy fits but is an alright bloke otherwise. More recent users prob'ly know me as that touhou prick whom always makes fun of your posts. For all five of you who actually decided to read this, thanks for your time and it's great to have you as readers!

If you have anything to say about the review – some compliments, complaints, corrections – or if ye just want to chat, then my userpage lists plenty of places where you can contact me. Please don't. Now, let's get started. 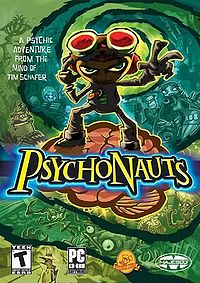 Video game companies have always had this habit of repeatedly treading old ground until the only people left purchasing their games are hardcore fans and people with too much spare income to throw away. It makes finding truly interesting games difficult, since you have to dig through seemingly endless layers of indistinguishable rock and dirt before finding the rare piece of gold or diamond hiding away in the crust. One of those rare gems is Psychonauts, the debut release from Double Fine Productions - the development studio formed by gaming legend Tim Schafer from just a few of the shattered remains of LucasArts' fun, exciting childhood – and one of my all-time favourite games. A true pinnacle of artistic design and characterization in the gaming medium, bombed completely because the vast majority of gamers are twitchy, attention-deficient Philistines who put bags over their heads whenever you present to them something not lovingly stroked by their arbitrary choice of the big three.

Our protagonist, Razputin. Note his goggles, they'll be very important later on.

Psychonauts is a platform game about a 10-year old boy named Razputin (more commonly known as 'Raz'), who upon learning of his innate psychic abilities, escapes from his circus home to enrol in a Summer camp dedicated to training young psychics to become Psychonauts, a group of specialized military agents with ambiguous legal boundaries. Being quite possibly the most badly run Summer camp in America, Raz is allowed by the irresponsible counsellors to take part in their [dangerous] mental training exercises without paying enrolment fees. But then shit hits the fan and Raz takes it upon himself to solve a conspiracy afoot in the camp, having to jump into the minds of the characters around him and explore appropriately themed ethereal worlds based on their sub-conscious quirks and memories. For vaguely relevant reference, it's kind of like the original, more light-hearted Inception.

Once upon a time, Tim Schafer first came up with the concept of exploring mental worlds when working on Full Throttle for LucasArts, where he imagined a sequence in which the main character lapsed into a psychedelic experience from consuming peyotes, which was refused by marketing for not being “family friendly” (in a game about murderous thugs and bikers beating the ever loving shit out of each other with wooden planks, chains with spiked skulls on them, and chainsaws, but I digress). Schafer held on to this idea and eventually turned it into a full game titled Psychonauts, minus the psychotropics (sort of).

I should first clarify that gameplay is not exactly the game's strongest suit, which may sound to you like saying an engine is not a car's strongest point, but bear with me on this one as this was Schafer's very first try at a genre other than adventure, which has resulted in functional but somewhat sloppy gameplay and controls. Platforming can feel a bit buggy sometimes, with the occasionally vindictive camera obscuring your view; combat can feel like an unvaried chore at times; virtually all the side missions are just a variety of fetch quests, some bordering on the impossible; and despite a phenomenal first half, the level design does start losing a bit of finesse in the final act, not aided by a ridiculously inconsistent difficulty curve which leaves many of the latter levels laying somewhere between a mild embuggerance to throat-achingly frustrating. And the final level is kind of a crapshoot, ending with a massively disappointing final boss fight that closes the game on a very underwhelming note. 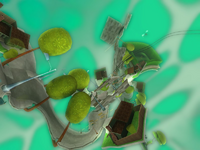 You only wish your street was this awesome.

For those of you who have put up with my ramblings up to now, there is a big "However!" here, since I said in the first paragraph that this is still one of my favourite video games. Because, despite having a few handling issues, the story and artistic direction is where the game truly shines. The story unfolds in a very well-paced and flowing sequence of events, wherein you start off learning the most basic of skills whilst picking up hints at the greater drama about to take place, and before you know it, you're on a quest to stop a ploy for world domination involving brain-powered battle tanks. Every single character is interesting and well-developed, including all the insignificant minor ones that you can spend the entire game never interacting with. The dialogue is genuinely witty and funny, whereas most game scripts tend to read out like a high school rendition of MacBeth as staged by Roland Emmerich. The environments are beautifully rendered and rich with humourous and clever references to whatever concept each mental world is based on, all sort of resembling if Salvador Dalí designed Mario levels...

But most importantly, it's just plain fun to play, and I'm sure we're all open-minded enough to look past the game's shortcomings and enjoy being able to manhandle armoured tanks, confront Napoleon Bonaparte in a board game, and light squirrels on fire. Psychonauts was released on the PlayStation 2 and XBox (now available on the XBox 360's XBox Originals series), and the PC version is now available on Steam for $10 USD, so if you haven't already bought it, I would much appreciate if you ran off to Steam right now and purchased it; hell, I'll buy it for you (if I like you enough)! Perhaps we can get a sequel petition started and convince Electronic Arts to fund another Double Fine game. And then maybe we can play hockey with panda bears and have a pool party with John Candy on Neptune.