The Super Mario Land 2 Hippo serves one basic function: To blow a bubble which Mario can use to reach the fan favorite Space Zone from his own Hippo Zone. Like the Bubble Plant, he is an ally of Mario's. The bubbles he blows are out of his nostrils, indicating they may well be snot bubbles.

He can blow bubbles. That is it. However, unlike the Bubble Plant's bubble, Mario has the power to float through the air with the Hippo's. Inside the bubble of the Hippo, the player can control Mario exactly as if he is playing an underwater level in any 2D Mario adventure. However, one touch of an enemy will destroy the bubble and send Mario falling.

As a hippopotamus (Hippopotamus amphibious), he is characteristically large in physical appearance. He loves to be by water like all hippos. He may be very lazy, which would explain why he is not seen to move. Many believe him to be not an actual hippo, but rather a hippo-statue. However, nothing has ever been confirmed. The game is 8-bit, and thus it is not possible to tell what the developer's intentions were. 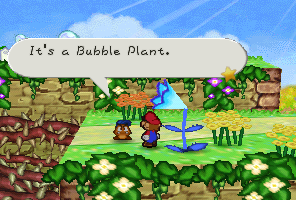 The Bubble Plant of Paper Mario fame does something very similar. Like the Hippo, he is absolutely necessary to beating the game in which he appears. He helps Mario float over a vine pit that would be fatal to him and his party were he to fall in, and then reach the Sun Tower.

Their powers are identical, and yet different. They both blow bubbles that Mario can fly in. However, unlike the Hippo who used nothing (other than most likely snot and saliva from his nostrils), Bubble Plant needs a Bubble Berry to make his massive bubble. Mario must proceed to collect a Bubble Berry from a tree in Lily's area. Bubble Plant's bubble is probably more durable than the Hippo's for two reasons. One, the Bubble Plant's does not an cannot break. However, this may be due to the fact that the player has no control over the bubble, so the bubble never comes in contact with an enemy, much less the vine pit below. Unless a bubble blown by a Bubble Berry is stronger than an ordinary bubble, the thorns below may have possibly popped it. The second piece of evidence for the bubble's strength is the fact that it is strong enough to carry not only Mario, but all seven members of his party.

He is a very tall, blue plant, and one of the most memorable characters from Flower Fields. His personality is easy to decipher, as he actually speaks. He seams somewhat braggadocios and show-offy, telling Mario how cool his ability is that he can only show him when he collects for him the berry. He feels all cool when he does it for Mario. It is not known for certain if he knows how much he is helping Mario, but since the vine pit is in front of him, and Mario goes out of his way to collect the necessary item for him, the odds are certainly in favor of it. However, it is impossible to know weather or not the Bubble Plant knows the details of Mario's quest. In fact, it is not known at all how plants rooted far away from one another in Flower Fields have the ability to communicate with one another.

There is no winner. You can look at this one of two ways: It is a draw, or they are both winners. They both have very similar powers that are imperative to Mario completing his adventures, and they both are very memorable characters from two great Mario games. They are both eternal parts of Mario's history, even if neither of them are ever heard from again.