Hello everyone! We are currently in dire need of new writers, so if you're interesting in writing for the 'Shroom, you can check out the sign up page. For Music & Artwork, we need writers for Box-Art of the Month, Character Artwork of the Month, Photoshopped Image of the Month, and Soundtrack of the Month. If you want to write for one of those, please let me know. 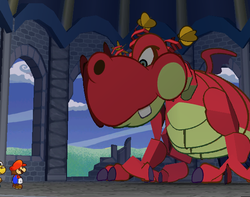 This month I've picked a cool screenshot from one of my favorite Gamecube games, Paper Mario: The Thousand Year Door.

In case you aren't familiar with this game and don't know much about it (which is a shame because it’s a great game), this scene takes place around the beginning of the game, when Mario and his partner Koops reach Hooktail at the top of her castle. Hooktail's been causing a lot of trouble for the neighboring village, so it's up to the pair to stop her. Even though she’s an early boss, she can be quite a challenge if you’re new to the series. I think it's really neat how they designed Hooktail. Most characters in Paper Mario are flat, but Hooktail is more three dimensional and is pretty detailed. You can tell a great battle is about to occur.

The musical composer Kazumi Totaka has composed a musical score for many Mario games. He has hidden his short, catchy 19-note tune in almost all of the games he has worked on, including all of the Mario games he has done. The Mario games where his delightful Easter Egg tune can be heard are: Mario Paint, Super Mario Land 2: 6 Golden Coins, Mario Paint, Virtual Boy Wario Land, Yoshi's Story, Luigi's Mansion, and Yoshi Touch & Go. In most cases, it is ingeniously well hidden. Examples include Yoshi's Story (where the player must wait two minutes and ten seconds on the Trial Mode screen), Luigi's Mansion (where the player must wait on one particular screen showing how to work the Poltergust 3000) and perhaps none more obscure than Yoshi's Touch & Go, where the player must pause the screen at one specific point in the game for a whopping 3:45. The game where it is easiest to find is Mario Paint, where it is heard on the Star Screen when the O is pressed. The player is bound to do this sooner or later. Below is an example of the song from Super Mario Land 2. However, if you own the game yourself, either the original cartridge or on the Nintendo 3DS Virtual Console, I encourage you to ignore the video and go to the Game Over screen and see it for yourself. You'll have to wait on it a couple of minutes. Whatever you do, don't save after checking it, or you'll have to beat all of the bosses again before you can fight Wario! If you want to watch the link here and want to hear his tune right away, click here.

For this month of April, FunkyK38 has this special sprite for you: Dark Fawful from Mario and Luigi: Bowser's Inside Story

! Fawful does not get enough credit, she thinks, and he should be allowed to run this column from now on!

Er, sorry about that everyone.... that's the last time I let Fawful suggest an image for this column. Although what he picked really is the MUSTARD OF YOUR DOOM!

I didn't get any artwork this month. However, if you have any drawings related to Mario that you think should appear here, send them to me (with a description on them, if you want) and they'll show up in the next issue of the 'Shroom!

The image to the right is of a Wild Ptooie Piranha, a slow-moving green Piranha Plant. It spits Needlenoses or Spiny Eggs at Yoshi in Super Mario World 2, Yoshi Touch & Go and Yoshi's Island DS.