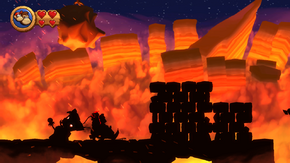 For this month, I picked out this awesome picture from Donkey Kong Country Returns that shows the Kongs and their Animal Buddy, Rambi, in the game's third silhouette level, Smokey Peak.

This level is definitely one of my favorites in the game. You ride on Rambi as he smashes through giant boulders in the silhouette world. For me, the background is beautiful. You can easily tell this takes place in the Volcano world, and there's hot flames rising in front of the large rocky structures in the background. The foreground looks really neat, and it's very detailed, even if it's all one color. Notice how Diddy's hat and DK's tie are both visible in the foreground. It makes them stand out more so you don't lose track of where you are and run right into one of those annoying Tiki guys (who I wish were the good ‘ol Kremlings from the older games). I can't imagine why someone wouldn't like this level.

Alright, that's about it for this month. I hope I didn't bore you too much :p Tune in next month for another great Screenshot of the Month.

This month, I have received a beyond amazing picture from Walkazo (talk) that depicts the Koopalings all grown up. Plus, I finally figured out how to put my drawings on the internet (yes, it took that long), so I’m displaying one of my pictures as well. Click on the pictures to view them larger. Enjoy! 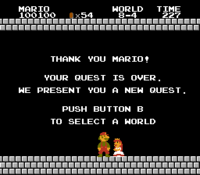 The image you see to your right is a scene from the end of Super Mario Bros., in which Peach thanks Mario for rescuing her. After Mario rescues Peach for the first time, the player can play in Hard Mode, in which enemies become harder and levels become more difficult.

! Besides being an enemy in the game, he also has a large role in the TV series, where he plays a bumbling general in K. Rool's army. He is mostly comic relief, he can't dance, but he can sing and talk like a surfer. Hang loose, readers!