Hello again...uh, Fake-lovers(?), and welcome to another edition of the Fake News. This is the fakest Fake News to ever fakely hit the fake shelves. By the way, Happy New Year! Now, sadly, due to a few unfortunate complications, there won't be any Fake TV, Cooking Guide or Ask '3K this month. But we do, however, have a few sections.

KoopaTroop here with this month's edition of "Character Battle"! This month, it will be an explosive battle between Bowser's minions and Mushroom Kingdom residents, Bob-Omb and Goomba! Different, you say? PM me your ideas! You can also vote for the next competitors on the forum! Now, the battle shall begin! 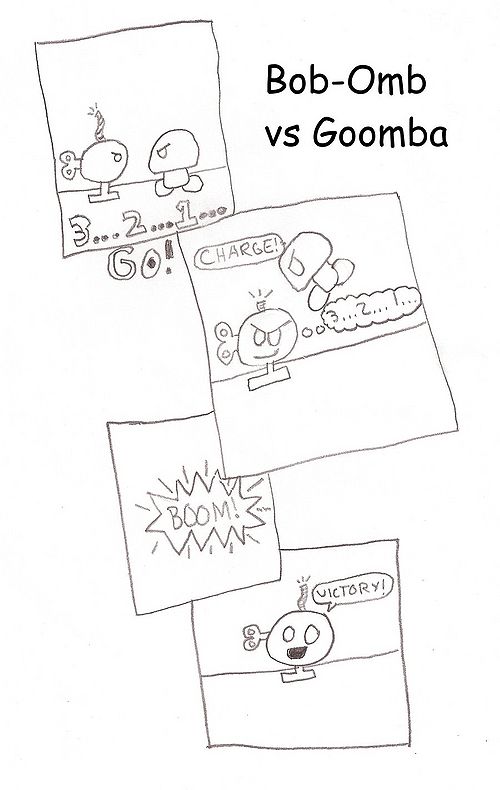 And the winner is Bob-Omb! He had Goomba fooled, and made his move. What an explosive finish!

Hello all to the not so famous section everyone looks forward too! Okay, let’s see…yada yada yada, skipping the introduction…ah, here we are! Excuse me for some lack of preparedness; accidentally lost my paperwork for most of the stuff. Anyways, the guest we are bringing out today for the beginning of the new year is Tayce T.! Let’s just right on in!

BMB: Just got to say, love your cooking, probably the best in the town.

BMB: Maybe next month Zess, but not now.

Tayce T.: Okay, what do you want to know, sweetie?

BMB: Well…did you bring me some of your tasty – yes, punny – samples like I asked?

Tayce T.: I was supposed to bring in treats?

BMB: Ugh, darn it MCD, I told you to get the list over to Tayce! There was supposed to be Honey Shrooms, Nutty Cake, and even Snow Bunnies!

BMB: And she doesn’t even make Snow Bunnies! Everything is so chaotic this month!

Tayce T.: Ahem…sweetie, don’t you have an interview to conduct?

BMB: Ah, yes I do. Hm…well, what was one of the most traumatic situations you have even been with during Paper Mario?

Tayce T.: Well, probably when I lost my Frying Pan to a Shy Guy. Ever since sweetie, I’ve been very agile around a Shy Guy.

BMB: Remind me to keep the stage crew from catching your sight. Anyways, what’s one of your-

BMB: RUN FOR YOU LIFE SHY GUY! RUN LIKE I’M GOING TO GIVE YOU MINIMUM WAGE!

BMB: Come on, don’t hurt him. Ouch…stop smacking him with that! Ow…he’s been on here many times before, please…oh, that had to hurt.

BMB: Well….while they are doing that, why don’t we take a short intermission and-what? Seriously, I don’t have one of those? Well, no intermissions I guess. Let’s see if I can pull Tayce T. back into focus.

Tayce T.: I’m going to kill you and every one of you masked weirdos!

BMB: Actually, I think we should cut off now. Wasted about enough time only to cause a massive war to happen. I’ll see you guys next month.

Tayce T.: GET BACK HERE!

BMB: Well…if I can stay out of her way.

MST3K received no questions this month. If you have an account on the Super Mario Boards, our forum, you can send him a question by personal message.