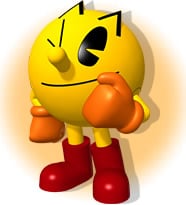 Hello everybody! Welcome once again to Fading into Obscurity! This month I decided to go with an old favorite character that everyone should know. I went with Pac-Man.