It's been a whole year since I started directing Music & Art! Boy time travels fast! Well, I'll be here as director for another year, so you won't have to miss me :p I'm very honored to spend another year on the 'Shroom staff. 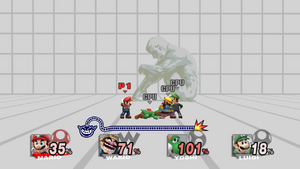 Hello ladies and gentlemen, and welcome to the 'Shroom's very own Screenshot of the Month. I'll be your host today as you enjoy this month's lovely screenshot of Mario and friends in... uh... WarioWare, Inc.

You probably know how the WarioWare, Inc course of Super Smash Bros. Brawl works; its main gimmick is that every once in a while, all of the fighters are brought into a microgame based off of one of the microgames from the WarioWare series. Well, here we see Mario, Luigi, Yoshi, and Wario himself in an area similar to the "Fragile!" microgame in WarioWare: Twisted. The object of this microgame during Twisted is to simply "not move" (since Twisted made use of a motion sensor, you actually had to stay still so that the egg shown on screen wouldn't break). Well, now in Super Smash Bros. Brawl, you again have to "not move," and anyone who is successful in keeping their character in place might earn a star or grow large for a short period of time.

The odd statue in the background is very... strange, but it does make sense being there. Notice how there is a bomb-like object below the characters. When the bomb explodes, the microgame ends and everyone is sent back to the main section of the course. Also, as you probably know if you’ve played Super Smash Bros. at all, the numbers at the bottom by the character's names are how much damage characters have taken. I'm not sure what's up with the characters in the picture. Mario is fixing his hat while Wario and Luigi stare at him, and Yoshi is just lying there dead.

The picture is pretty odd, and the background is very unusual, but of course that's the best part of the WarioWare series. I hope you enjoyed this month's Screenshot of the Month; tune in next month for another great image! 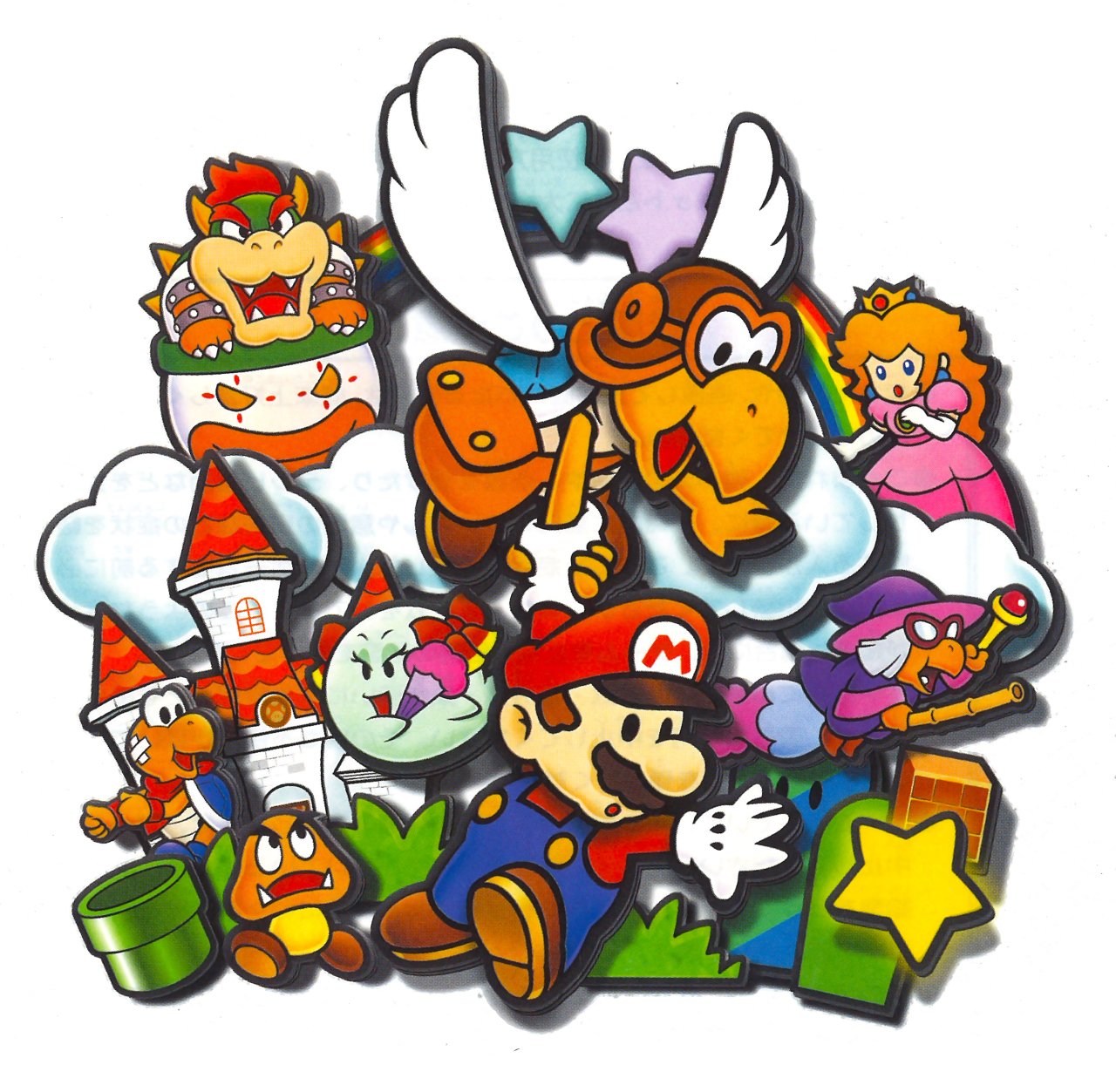 This month marks the 11th anniversary of the greatest RPG of all time: Paper Mario (February 5th, to be precise). I know, the tenth anniversary a year ago was certainly a bigger deal, but an unfathomably charming gem like this deserves to be honored every year around this time (Which I have done on the fifth of February every year since 2002. What I do is start a file from the game's last save block, beat Bowser, and watch the end parade, culminating with the enrapturing scene of Mario and Peach on the balcony watching the fireworks while two of the most beautiful musical compositions ever written for video games play.) Ah, to revel in a victory over a decade past. There is no argument against the fact that this game has the greatest music of any video game ever released. The composer Paper Mario was Yuka Tsujiyoko, to whom I am now giving a much deserved shout out.

January and February are depressing months. The holidays have past, and there are are no imminent ones in which to look forward to. The world is dark and cold, all the trees are bare. But pop Paper Mario into your Nintendo 64, and you will feel... the scent of Flower Fields in the air. Yes, Paper Mario, the miracle is due to you, just you. Step outside into the snow on this February day. Now play the music to Shiver Snowfield in your mind and walk around. Let it take you back. Let every snowman you see be in need a Fabulous Scarf or a Marvelous Bucket.

Oh, Lord! Every location from Goomba Village to Goomba Road to Toad Town to the Toad Town Tunnels to Pleasant Path to Koopa Village to Koopa Bros. Fortress to Mt. Rugged to Dry Dry Desert to Dry Dry Ruins to Forever Forest to Gusty Gulch to Tubba Blubba's Castle to Shy Guy's Toy Box to in the '"Tuna's"' (Kolorado what are we going to do with you?) belly, to Jade Jungle, to Mt. Lavalava, to Flower Fields, to Shiver Snowfield, to Shiver Mountain, to Crystal Palace, to Star Way, to Bowser's Castle (Did I forget anything? Doubt it.) is as fun, unforgettable and timeless and anything you will ever encounter in any other game. Probably more so.

I'm going to share a couple stories from eleven years ago this month when I was in school around the time of the game's release. I told a friend on February 5th, 2001 named Ryan W. that I was going to get Paper Mario today. He told me to go from classroom to classroom yelling, "Hey! I'm gonna get Paper Mario today!" And guess what, I did it! And boy, were all of the teachers around the school mad that I had interrupted their classes. One cannot not cave to peer pressure when it is brilliant advice like that! To announce such exciting news to the world! The next day (2/6/01), Ryan W. asked me if I had gotten Paper Mario. I told him I had not, for the Wal-Mart in my area had not gotten it in yet. But I told him, '"God as my witness, today shall be the day!"' And it was. And I whizzed through the game in five days. I was blowing through it very fast (I was saving two Star Spirits per day), but it was too addictive to put down. After beating it, I e-mailed Nintendo of America (noapulse@nintendo.com) congratulating them on a masterpiece, informing them I had beaten it. Even though I had not gotten my copy until one day after most of the rest of the USA had, they e-mailed me back thanking me, and told me they could not believe that I had already finished Paper Mario! In the decade +1 since, all four save files on my copy have been completed with every Star Piece and Badge (and maximum level 27).

How about one more story from school in February of aught-one? The commercial that advertised the game was extremely hilarious. It involved Paper Peach being lowered into a shredder. It made my whole class laugh when they saw the add, myself included. How dreary the world would be without the Paper Mario. As dreary as no Rock Mario. Let's all drink a Tasty Tonic in honor and anticipation of the upcoming new entry to the series on the 3DS. Will it hold up to the original? Only time will tell.

For this February issue, I have brought you this sprite of the Wisdurm from Mario and Luigi: Bowser's Inside Story:

. It is pink and lovely and everything you want for Valentine's Day, minus that fact that the Wisdurm IS a boss, and a hard one at that. Also notice the heart-shaped cure at the end of its tail. Very clever, Nintendo. 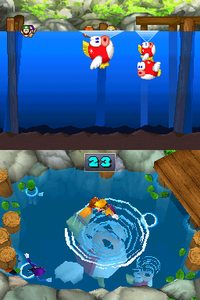 The image depicted to your right is a screenshot from the Mario Party DS minigame Cheep Chump. Players have to try to swim in a pool while avoiding whirlpools created by Cheep-Cheeps. The player that survives the longest without getting sucked into a whirlpool is the winner.

I didn't get any artwork this month. However, if you have any drawings related to Mario that you think should appear here, send them to me (with a description on them, if you want) and I'll put them in the next issue of the 'Shroom!