Hello guys! You're probably wondering why I'm so happy (well, you might not notice, but I am). It's because next month there's two important things happening. First of all there's Halloween, and second of all, and a lot of you don't know yet, is my birthday!

So today, this will be the birthday edition of the Entertainment section, even though it's not my birthday this month, but it's so I can fit in room for the Halloween edition. This month it will be about me, and thankfully, there is a Mario flash movie made by me, one of them having me in it. So I'm going to give you a behind-the-scenes tour of SK Bloopers made by me! (And by the way, it's rated T.) 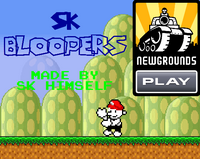 The title screen, with only one button!

There are a few short skits in this movie, including a spoof of the "IT'S OVER 9000!" meme and a Benny Hill styled chase, while everything is still related to the Mario series. But like I said, this will be a behind-the-scenes tour of it, so let's get going!

Scene 1 was going to have multiple 'takes', one involving a spike coming out the top of a block that kills a Goomba who is unfortunate enough to jump on top of it, and then a second longer spike comes out the bottom and kills, uhmm..., me...

In scene 2 the way that the Koopa Troopa was cut off because... I stomped on him is because when I downloaded the sound for his voice, the end of it was chopped off, so I decided to make a little change to my original plan.

Scene 3 never had anything different about while it was in production, though I did have plans to make more scenes between this one and the final one, but I ran out of time to make it.

In scene 4, Princess Peach was never going to cuss. Also, Bowser was going to cuss twice, but I forgot to put it in, so I decided to leave it like that.

Yes, normally a behind-the scenes tour is a little longer than this, but it's just a flash movie, there isn't really a lot of beta things to tell you all. Well, anyway, I hoped you enjoyed this month's edition of the Entertainment Section!