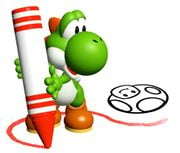 It’s been another fast month, and now it's time for another issue of the 'Shroom, featuring even more music and artwork than last month. We've got one writer for almost every section in Music & Artwork. The only open section is Photoshopped Image of the Month. If you would like to write for one, tell me and I'll give you the application to fill out. Remember, though, only one person can be chosen for each section, so you are not guaranteed to get the job. Also, congratulations to Baby Mario Bloops (talk) for getting the job for Box-art of the Month!

I've actually gotten a few drawings for Sketches Related to Mario this month. Come and check them out! If you have some Mario-related drawings, send them to me and they'll show up on the next issue!

I would also like to thank everyone who voted for the Music & Artwork section as their Favorite Sub-Team in the Awards Ceremony. I am happy to know that so many people enjoy reading the sections this team has to offer!

That's all I have to say. Read away and enjoy!

Hi again, MarioWiki, and welcome to this month's Soundtrack of the Month section! This month, I chose a pretty cool song from the game Tetris DS. The soundtrack is called "Mario Tetris 3" and plays in Standard mode levels four, five, and six. Enjoy!

In honor of the Wiki's 6th anniversary, here is the Sprite of the Month:

Bowser from Bowser's Inside Story! Yes, Bowser is the only way to go if you're looking for a reoccurring villain from the Mario series. Anyone who's anyone can recognize him!

Hey everybody it's PyroGuy6 with the Character Artwork of the month. This month we have a beautiful picture of Watt from Paper Mario. I could stare at it all day. *stares*

*one day later* Yeah that's pretty much it. I'm going to bed. my eyes are tired from staring at Watt.

This month, I’m going to present you something more special: beta video game music! Now, the first thing I wanted to point out is that there are two ‘types’ of beta music. First, we have soundtracks which are only variations of the definitive theme it-self, like this one. It’s a little variation of the figure 8 circuit’s theme in Mario Kart DS, you can barely hear any differences. Then we have also the type of beta music we can also call ‘unused music’. Even though they didn’t manage to make it into the game doesn’t automatically mean that they are bad and should be neglected. Now, enjoy those wonderful beta tracks!

Mario Kart DS, unused theme
A very smooth and energetic track! It might be the beta version of the circuits’ music.

Super Smash Bros Brawl, unused theme
An orchestrated version of the Forest Maze in Super Mario RPG. Why didn’t they keep this in the game?

Paper Mario: TTYD, unused theme
Well… Not much to say about it, I like it! It reminds me of the music used in the Mario Party series.

I hope you enjoyed my article. :) 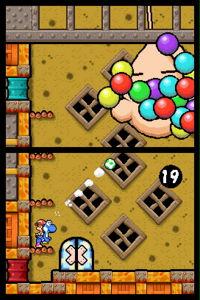 This image is a screenshot from Yoshi's Island DS.  In this scene, Yoshi is fighting Gilbert the Gooey, the second boss of World 1.  He can be defeated by destroying the 20 spheres surrounding his body.  Yoshi can destroy the spheres by eating them or throwing eggs at them.

What a beautiful scene!

Hello and welcome to another exciting Screenshot of the Month. This month, I chose probably one of the most beautiful and detailed screenshots on the whole Mario Wiki. It is a large, high quality screenshot of the Mushroom Kingdom from the popular game,  Super Mario Galaxy. This picture gives you a wonderful view of the castle and much of the kingdom. There is just so much to look at here. You can see the light of the castle reflecting off of the pristine water. Just look at the sky! The color of the sky looks spectacular, and it's full of stars, which although small, would take some time to put there.

Not only can you see the castle, but you can also see Toad Town. At this night, all of the Toads are celebrating the Star Festival, where countless Star Bits fall from the sky. You can even see some of these Star Bits falling in this picture. The town is full of lots of color and you can tell it was a happy time for the Toads (until later in the game). As with many games, Princess Peach's Castle has not changed in appearance. The waterfall is still by the castle, a bridge is still there to lead players to the front door, and even the area in front of the castle looks as it did in Super Mario 64. It's no wonder Super Mario Galaxy was always praised for its great graphics. This amazing picture definitely makes a great Screenshot of the Month!

Three great drawings were sent to me this month! Have any drawings you want to show up on the 'Shroom? Send them to me and they'll appear in the next issue!

Our first drawing was sent by Baby Mario Bloops (talk): 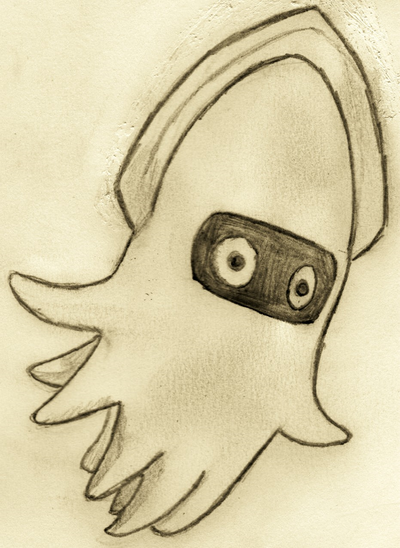 Both of the following drawings were created by YoshiGo99 (talk): 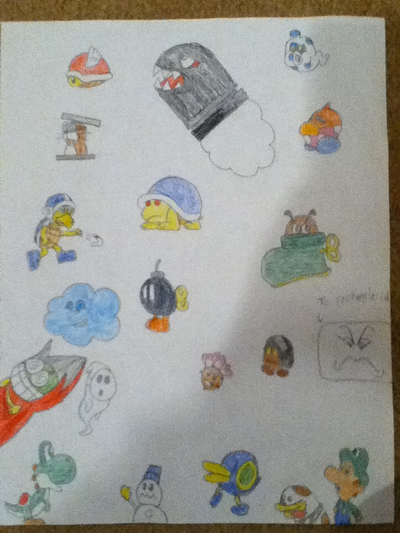 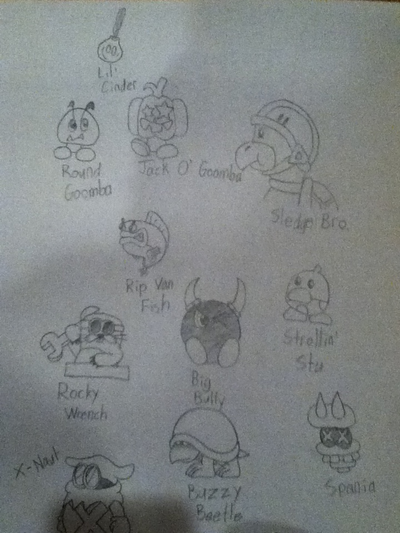 That's all for this month! Tune in next month to see some more great drawings!