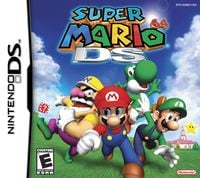 Hello again! This month I will be reviewing a game that has captured the Best Remake award every single year in the Mario Awards, Super Mario 64 DS! This game was released in the US in November 2007 as a remake of Super Mario 64, a game released in 1996. Many changes were made between the original and the remake.

Yoshi arrives at Peach's Castle. Not only is Peach missing as usual, but Mario is too! Yoshi has to find Mario, and the two then have to work together to find Luigi and Wario over the course of many 3D levels. Super Mario 64 was the first 3D platformer in the Mario series, and Mario was the only playable character. The game includes multiple battles with Bowser and other bosses and a total of 150 stars to collect. 80 stars must be collected to reach the final boss fight. The game is broken up into 15 worlds of 7 stars each, and there are also 30 secret stars scattered around the castle. Each level also includes a star that can be earned by collecting 100 coins, which all adds up to 150.

This game has a tough learning curve, but it becomes more and more fun as you unlock more levels. I prefer the camera angles in this game over the angles in any of the other 3D platformers just because it's easier to adjust (holding the L button and pressing the D-pad). Players can easily pick the camera angle of their choice.

Of the many changes between the original game and the remake, the most notable are:
-The inclusion of Yoshi, Luigi and Wario as playable characters
-Items that can only be used by specific characters
-The introduction of new stars
-The ability for Yoshi to put on a cap and imitate one of the human characters
-A room to switch between characters

This is a fun game because it has lots of original bosses, interesting level layouts and creative puzzles to complete. I give it a 9.5/10. The only drawback is the learning curve.