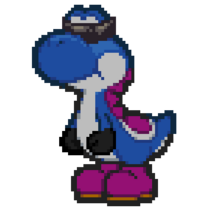 Hello again everyone, I hope you're enjoying this special issue!

I'd like to take a moment to welcome a new member to the Music & Artwork crew - starting this month, Soniccity08 (talk) will be writing Soundtrack of the Month. Welcome aboard!

I am now done so enjoy the rest of the issue and stuff. 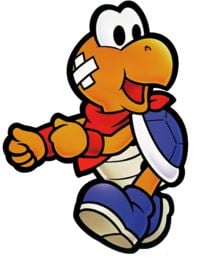 So, after last issue's facepalm-worthy section, some arcane magic and dropping the other contender from the top of some huge fortress, I have decided for this month's special N64 theme, Tucayo Kooper gets the feature here, being a great character from an N64 game (which I unfortunately haven't played) with actual, and great artwork (Whomp King is a great character too, but had no real N64 artwork).

Hello, readers, and welcome to the July Issue of Random Image of the Month!!

This month's random image comes from one of my favorite games, Paper Mario. It shows Bombette using one of her special attacks, Mega Bomb.

Bombette, one of Mario's partners in Paper Mario, is able to use Mega Bomb after being upgraded to Ultra Rank. The attack uses 8 FP, and requires the player to press

repeatedly in order to successfully execute it. It damages all enemies, regarless of their position in the battle field.

Hey everyone, this month the Music Factoid is on Power-Up Music! Most of the Power-Up Music we hear to this day origniated from the game that started it all, Super Mario Bros.! The catchy tunes have endured through the ages, over a quarter century, since Ronald Wilson Reagan was president. But new games have brought newer Power-Ups, along with newer Power-Up tunes. Only time will tell what the tune for Flying-Squirrel Mario will sound like! 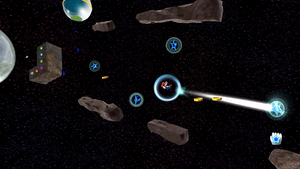 Hello 'Shroom readers! This month's Screenshot of the Month is taken from Super Mario Galaxy. In this picture, we have, of course, Mario, as he uses some pull stars to travel through the Space Junk Galaxy.

Obviously, this image has high quality and is a decent size, but besides that, I find this picture to be very pretty, with all the stars in the background. Another thing that seemed to catch my attention was that the rocks floating around Mario look kind of cool there. The L shaped rock in the picture is covered in star bits that you can collect if you use the pointer.

Well, that's what I have to say for this month. See you next month!

Soundtrack of the Month (Soniccity08 (talk))

Hey, it’s me, Soniccity08! And this month’s soundtrack is from Super Mario Bros. 3! It’s the final boss theme!

This theme goes along really well when you are fighting Bowser in his castle. It is kinda like the Super Mario Bros. final boss theme, but it has a faster and catchier tune. It really helps you during game-play to …basically…make Bowser commit suicide (if you beat this game you know what I mean)!Later in a lot of other Mario games, this tune was remixed into other Bowser fights.

In honor of this N64 issue, Sprite of the Month is a little different this month! I give you this screenshot of Metal Mario from Super Mario 64! 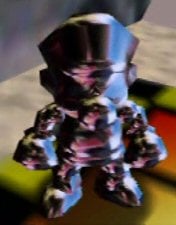 Super Mario 64 was one of Mario's classic games, and it was the debut of this ability. It has since become famous in several different games. Please enjoy this screenshot, and the rest of the N64 issue!