Greetings, y'all! I'm Luigi 64DD, and I was a regular old Luigi recolor living in the streets of New Wikisburg until a left-handed unusually-colored radioactive Mario called me, and I quote, a "silly goose". From that day forth, I took on a new identity: Gooseman! I now fight the criminal ne'er-do-wells in the city of New Wikisburg all while making hilarious quips, honks, and wisecracks! That is, if "fighting ne'er-do-wells" means "playing in mafia games" and "making hilarious quips, honks, and wisecracks" means "making lame jokes in the chat".

Anyway, I don't write much for the paper nowadays (a grave sin in the eyes of certain birds, ninjas, magnates, and shoes), but if you've read the paper religiously you might recognize me from here or there. Earlier this year, I wrote a special section called 64 Wars: A Battle for Sales, where I talked about the console war between the N64 and the Playstation and where the N64 could have done better (it was actually a research paper I wrote for college and submitted to the 'Shroom, but don't tell the staff that). I've also been seen in Poll Committee sections such as Poll Committee Discussion and Awards Analysis, the latter of which you'll be seeing me in again soon! Lastly, if you were around for the distant by-gone era of 2017 and 2018, you may have read my regular section Countdowns where I ranked various things in Top 10 style. So not a whole lot recently but who knows, maybe this fowl writer will return to the roost sometime soon....

Now, a fun fact. You may have heard that a certain Jack Black is going to be voicing everyone's favorite fire-breathing Koopa, but did you know the real Jack Black is actually a dangerous criminal cultist who has a strange obsession with octagons, practices dark oven-teleportation magic, and unjustly takes over glorious kingdoms from their far more deserving and far more handsome rulers? It's true. I certainly am not a biased party and this definitely isn't Russian propaganda. Signed, anyone other than a certain deposed czar.

Eat this candy, and you'll grow some nice whiskers and gain the ability to swim gracefully and effortlessly. However, it will also make you unable to resist eating whatever random stuff might be floating on the surface of the water. 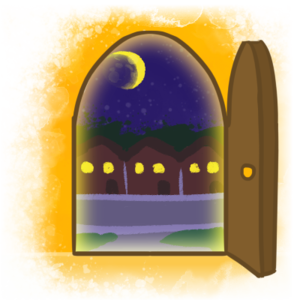