From the Super Mario Wiki, the Mario encyclopedia
< The 'Shroom:Issue 165
Jump to navigationJump to search

'Tis the season to be invaded by aliens. This month, the 'Shroom has been invaded by the fiction Shroobs, and their new law states that all media needs to be praising the Shroobs. I, for one, welcome our new alien overlords. I hope you'll all have some happy holidays, if you celebrate.

Being this year's last special issue, there some new specials. Please check out the end-of-the-year awards, vote in the director election, read the special Switch It Up! section, where Reverse Input reviews The Messenger, maybe check out the Killing The Killing Game special written by The Pyro Guy (talk), and check out this month's 'Shroomfest. Also check out the other teams to see what extra sections they cooked up this month.

As for Fake News, after a lengthy absence, Goombuigi (talk) will be returning, writing Monthly Inquisition. We also have a guest section, in the form of Shop Scout, a section from our previous Fake News director, MrConcreteDonkey (talk)!

As with every month, if you wish to write for Fake News, or any other team for that matter, please head over to the sign up page!

Last month's Section of the Month results are a bit different than usual; this time, the winner was Booguette, a guest writer, and their section Horoscope, with a massive 40 votes. Congratulations! The other winners also deserve some recognition; Quizmelon (talk)'s 23 votes gained from their TV Tomorrow section, and Yoshi876 (talk)'s 21 votes from their Obituaries section, as well of the fourth place Peddler's Place made by Coffee with 3 votes, also did great. I encourage our readers you enjoy our sections this month, and to vote again! 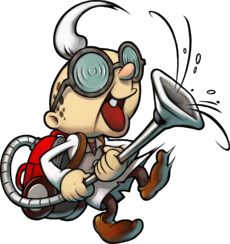 Like most, he hated past photos of himself and only allowed us to use this recent one.

The younger Professor Elvin Gadd resumed his studies at the Thwomp Volcano after helping defeat the Shroob invasion, but the volcano erupted again, and this time the professor was not so lucky and he was killed in the ensuing eruption. Having examined the body myself, I can confirm that it was more char-grilled than the toast I attempted to toast, however, unlike on that occasion no fire alarms were set off and I didn't need to shift the blame onto someone else.

Explaining this strange paradox to me, the older Professor E. Gadd said: “This is possible because the Mario series has just entirely given up on continuity. You could kill Baby Bowser and you'd still be finding the princess in another castle the next day. Besides, you should know all about continuity, considering how you're considering reusing jokes from the previous obituary for this one!”

I was one step ahead of the good professor, everyone knows he's never been in a Mario Kart game, so I can hardly repeat that joke; although I did have to quickly delete questions on whether he remembered burning horribly in a fire and why his skin looks so good right now.

The funeral of young Professor E. Gadd will be held on Yoshi's Island. Ghosts are not certain whether to make an appearance as they dealt more with the older E. Gadd and don't want to cause too much of a scene. Thankfully, Baby Luigi will attend the funeral alongside Luigi, but Baby Mario had a pressing matter to attend to, the towers he spent building for the past five minutes won't knock themselves down and force him to cry about it. Funeralgoers are reminded that although the body is still incredibly warm, it is actually discourteous to toast marshmallows over the body. Sausage wieners are anybody's game though.

Would you believe it? My car broke down again. I don't even know how it happened. I just woke up as usual, left the house and went to unlock my F Dasher, only to find the car had completely vanished, with a weird purple mushroom sitting in its place. If that wasn't bad enough, the next thing I know, this massive spaceship appears above me and latches onto my leg with this grabby metallic arm, pulling me onboard.

When it finally drops me, I'm in this cockpit-esque chamber. There's all these weird noises blaring out, and piles of random junk stacked up to the ceilings. So I start walking around for a while, looking for a way out - but, unfortunately, come across something I'd hoped to never see again... 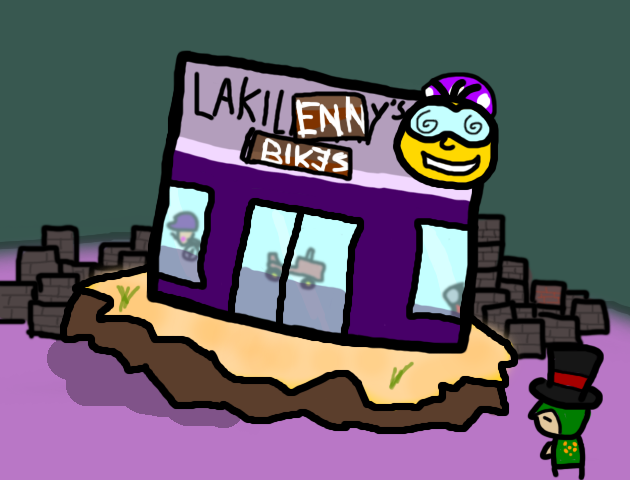 There it was. I was starting to wonder if this whole abduction thing was just a ruse to get me to buy another one of this guy's tacky go-karts. Out of necessity, I swallow my pride and head in. The new owner of the shop introduces himself to me as "Lakishroob", and wears this neat purple hat and space boppers. There's also a completely purple guy standing in the corner of the store, looking me up and down while clutching a ray gun. Lakishroob tells me his name is "Gene".

Suddenly, Lakishroob grabbed me and pulled me aside. He told me his assistant Gene was actually en elite Shroob guard, and he needed me to buy a car from him so we could go out and "give it a test drive" - at which point, we'd escape. Once again I had failed to not buy a car from this guy.

So then Gene follows me as I start to walk out, holding up the ray gun - when, all of a sudden, Lakishroob leaps on top of him (somehow?) and snatches the ray gun.

Then he turns the gun on me. That's poor customer service if I've ever seen it. 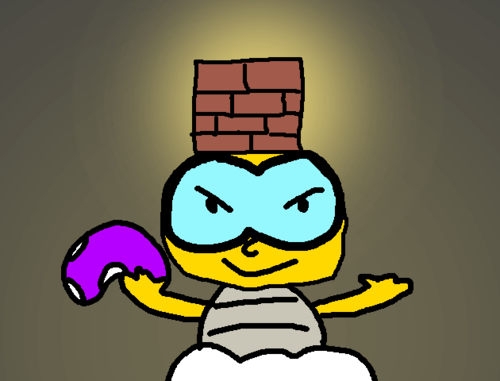 : Since when were we on YOUR ship? 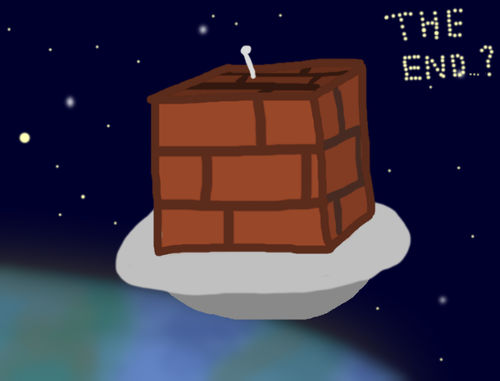 All in all, I cannot recommend Lakishroob's shop for hospitality (had a ray gun pointed at me multiple times) or location (not close to any roads), but it's still been the most pleasant experience I've had in this shop. I give it a 3/5. 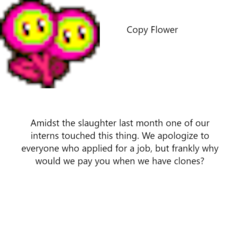 Panic! Panic! Panic! The Shroobs have landed in the Mushroom Kingdom and are taking over. Nobody is safe from the terror they cause and the havoc they wreak, not even the television controllers over at MKBC Studios or any of the other channels. The Shroobs have captured the major signal masts and switched all the programming over to their strange alien channels. This is horrifyingly unfamiliar territory for me, as I can’t understand the language, and the signal isn’t great; but I fear that if I do not review these programmes well, I will be swiftly liquidised. Hopefully someone will deal with this soon - meanwhile, here’s the best three programmes from another world...

Try to understand Love is Out of This World at 6pm on SPBC1 tomorrow.

Love is Out of This World (approximate title)
SPBC1, 6pm
Genre: Telenovela (I think)
This is one of the longest-running programmes on the Shroob Planet Broadcasting Channel, and focuses on the romance between an alien woman and a handsome human male (who is also being played by a Shroob, and it’s not obvious at all). I think the episode I watched demonstrated the powerful passion of their love, and how connected they were despite their differences, but it could just as easily have been showing a rocky and tumultuous period in their relationship. It honestly seemed like both at once... Still, definitely worth watching, five stars, please don’t kill me.

You Shroob, You Lose, now with human contestants, airing at 4.30pm tomorrow.

You Shroob, You Lose (approximate title)
SPBC2, 4.30pm
Genre: Game show (probably)
This is another Shroobian (Shroobese?) long-runner, hosted by the suave Grkeblik Jeejuyge (the best attempt I could make at romanising his name). However, to celebrate the successful invasion of the Mushroom Kingdom, tomorrow’s episode is a very special one, featuring human contestants instead of Shroobs. The aim of the game is to answer multiple-choice questions and then compete in physical games to earn points; the loser has to face the deathly Shrooboid, and often the winner does, too. Overly complex and quite harrowing for human viewers, this one is a definite recommend from me, provided I don’t get liquidised.

This is the opening shot of Squawk! on SPBC1. It is also perhaps the least confusing.

Squawk! No Bread is Kjakhohih For What? (no idea)
SPBC1, 9.30pm
Genre: ???
Honestly no clue what this is. There’s interspersals of cosmic reverberating which could be Shroob laughter, so maybe a comedy? Scenes switch from one to another with an alarming lack of warning; there seems to be a host (or three) but they rarely say more than six words at a time and spend most of their time just standing there with ominous grins; and the show is continuously intercut with colourful adverts for some kind of confectionery, or perhaps heart medication. The title is the best translation I could find in my dictionary - we don’t seem to have an equivalent of the word ‘Kjakhohih’ in English. Oh, but it’s a fantastic show, loved every moment, I don’t want to die.

It’s a real shame, too, because this was meant to be the article I used for the yearly tradition of festive television, with all sorts of wintry programmes on to bring good cheer and merriment. The Shroobs don’t seem to celebrate Christmas or any similar alternative, unless their traditions include obliterating villages and laser-torturing people to death. If anyone has a time machine, I suggest you use it now, and save us all. Do it for the integrity of the television media industry! (Oh, and everyone else, I suppose.) If the world is saved, I will see you next month. If not, I’ll be in liquid form. Fingers crossed!