From the Super Mario Wiki, the Mario encyclopedia
< The 'Shroom:Issue 140
Jump to navigationJump to search

Hi, everybody! Welcome to the November issue of Palette Swap!

We're a little sparse this month for sections, unfortunately. You can help make a difference, though! Send in an application to write a Palette Swap section! You can choose a schedule that works for you, a section you want to write, or you can make a brand new section! Send in your completed applications to our Statistics Manager, LudwigVon to get your application process started!

I don't want to keep you from reading our fantastic art sections this month, so that's all for me this month! See you next month for the SMASHmas special!

Another win goes to Yoshi876 (talk) for his What's on the Box? section detailing the boxart of the recent remake Luigi's Mansion on the 3DS. Congratulations, and thank you everyone for voting!

Shoot for the stars with this box art!
[read more]
Pyro updates his list of community projects!
[read more] 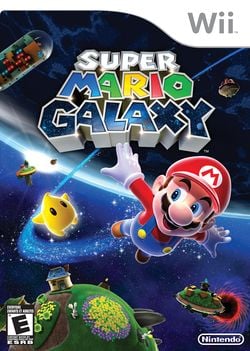 Even though I've been doing this section for several years now, I haven't covered many of the iconic Mario games, the big 3D platformers that made everyone love 3D Mario, or the iconic platformers from the NES and SNES era, so I figured that, at least for this section, I would change that.

And what better place to start than one of the more recent games that many people view as one of the pinnacles of gaming, Super Mario Galaxy. The boxart, even before I get into anything, is incredibly beautiful to look at. None of it looks barren, it captures that space feel, and as a consumer I am immediately sucked into it.

The boxart features Mario and a Luma flying through space, presumably after being launched from a Launch Star. They're passing various planets from the Gateway Galaxy and the Good Egg Galaxy. The boxart also gives you a brief preview as to two of the bosses that you'll be fighting in the galaxy, Dina Piranha and King Kaliente. There is also a Star Bunny on one of the planets, and in the background there's a Black Hole that appears to be pulling one of the planets in.

But even though this boxart is beautiful, there are a couple of things I wish it featured, mainly Rosalina and the Comet Observatory. It's not like they're secret things in the game, neither is it like they're late-game things, and seeing as they're both fairly central to the game's overall plot it would have been nice to see them somewhere in the background. Obviously, if they were included with what's already there, the boxart would run the risk of being crowded, but I would be fine with losing a couple of the planets that are there in order to accommodate them.

Overall, this is one of my favourite boxarts that I've examined for this section, despite what I think it's missing, it is still one of the most beautiful boxarts in the Mario series, and it manages to find that fine line between featuring enough to fill most corners, but not looking overcrowded.