Somebody who understands Japanese should add it to the list.
The preceding unsigned comment was added by WarioLandGoldPiramid (talk).

I added it (it's pronounced "a-chee-nya"), though I'm not sure what the exact English transliteration could be or what the name could be alluding to.

Even though it's a desert, the pyramid and the temples look more like Mayan or Aztec temples. It makes sense considering the Mexican inspiration.

So since the Nintendo Direct video revealed that the Power Moons are organised by kingdom and not area, should the Power Moon list be moved to Sand Kingdom?

In fact, should all the information on the area page be moved to its respective kingdom page, and the former turned into a redirect? From what I've seen so far, I think Nintendo is basically treating each kingdom as the "greater location" of its respective area, but you're actually just exploring the one area. There doesn't seem to be anything else in the Sand Kingdom other than Tostarena (as proven by the map in the video I linked), nor is there anything else in the Metro Kingdom other than New Donk City (and so on), and because of that, there wouldn't be much general information that can be added to one page that would distinguish it from the other if we were to leave them separate.

I agree with you on that. It's kinda annoying to see all those red links for each of the kingdoms, and I think it'd be easier to organize it anyways. We're probably not going to be running into these Kingdoms in any other games, especially not anytime soon.Argonstorm32 (talk) 16:12, 14 September 2017 (EDT)

I agree. When we saw the Moon Collection screen in the Direct, and it showed that there are 69 Moons in the Sand Kingdom, and not in Tostarena, that pretty much confirms that every location will have just one landmark, and we could just put this info into Kingdoms. As long as we aknowledge that we're only exploring one landmark/town/place in that Kingdom. WarioLandGoldPiramid (talk)

I agree too. I also think we should label the Power Moons in in-game order, but only after the order of the confirmed power moons is known. Although, we could put numbers to the ones that have a confirmed number.

I agree with moving this page to Sand Kingdom. In fact, Tostarena was always labeled as "Sand Kingdom", even in the E3 demo, so the page should have been called "Sand Kingdom" from the beginning (not "Tostarena"). legomariofanatic (talk) 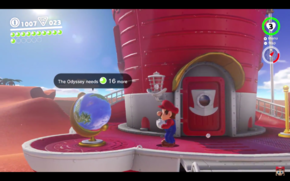 There's one thing that's been bothering me about the UI.

As you can see from yesterday's Nintendo Direct footage, the globe says "The Odyssey needs 16 more Power Moons". As you can see in the upper left corner, the Power Moons placeholder section has 16 slots, but 11 of those slots are filled. I personally think this means that you need 16 Power Moons to power up the Odyssey, but I know that the article currently says 27. How should we address this? Argonstorm32 (talk) 16:09, 14 September 2017 (EDT)

It would make more sense if Mario needed 16 moons and not 27, because then the markings would be misleading. I'm goig to guess it says "16 more" because Mario found the Power Moons, he just hasn't added them to the Odyssey's fuel source yet WarioLandGoldPiramid (talk)