The Black Box is a therory or joke about Waluigi being playable in Super Mario 64 DS. It is unknown who created it, but what is certain is that it is not real and the word has spread for other people to try do it.

The 'Black Box' is next to the tree.

Later someone thought that if the player was to hit the black box, a vortex would open up in front of the painting of Princess Peach. Of course this can't happen, since the box is just an accidental graphic that appears on the select file screen. But the therory still went on anyway.

The fake instructions to get Waluigi is that during gameplay, the player will need to get the wing cap and try to get at the same angle as the file screen, (which is impossible) then the box will be visible. The box is 2D, so the player will have to fly straight into the box and ground pound on it. A vortex will open in front of the painting of Princess Peach. The player will need to fly into the vortex, where he/she will be in a room which looks like the mirror room on the second floor.

The only difference will be is that some of the paintings will be different, and the player will see that the Wario painting is replaced by a picture of Waluigi. There will also be a goomba in the room. The player has to defeat this goomba and get the Luigi cap off it. Like the player would go to the Chief Chilly Challenge, the player will have to get the Power Flower and jump into the Waluigi painting. 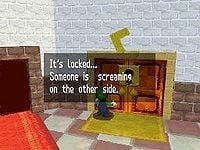 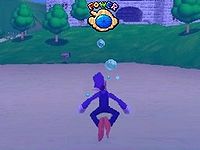 The player will have to swim all the way to the top which is at the tip of the castle, where there will be a ? block at the top. Inside of it will be a Power Flower, which will give him lightning abilities. Striking the top of the castle will make a hole in it, which reveals a small dark room with nothing but a switch in it. Pressing the switch will drain the water back to normal so the player can go back inside the castle. It is unknown why this was added to the therory, probably just to make use of Waluigi's powers. Some of the miniboss sayings might be interesting to watch with him.

Also, that 'Black Box' on the menu screen will be gone.

As mentioned before, it is unknown exacty why that Black Box is there in the first place, as it is possinble it is just a mistake. In a way this could be true, but it might just represent the cannon, but it wasn't coded right therefore it appeared next to the tree instead.