This article is about the accessory belonging to Princess Peach. For the jewel in Mario & Luigi: Superstar Saga, see Beanbean Brooch. 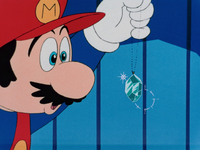 Mario looking upon the Brooch in awe.

The Brooch is a circular crest worn over Princess Peach's chest. It originally appeared in Super Mario Bros.: Peach-hime Kyūshutsu Dai Sakusen!, although it appeared in subsequent artwork. Starting with Super Mario World, Peach is almost never seen without it.

In this interpretation of the storyline of Super Mario Bros., the Brooch (as Peach calls it during the ending) plays a rather large role.

After Peach briefly escapes from the Koopa via Mario's television, she seemingly dropped her Brooch during his unsuccessful battle with King Koopa. After coming downstairs to investigate the racket, Luigi jadedly dismissed the Mario's claims as a result of his brother playing too many video games. Alone, Mario soon afterward spots it on the floor of their home, confirming to himself that the experience was not a mere dream. Its existence and power to remind Mario of Princess Peach also seemed to mesmerize him, as he was too focused on it to successfully fulfill Miss Endless's shopping orders the following day. During this escapade at the Grocery, Luigi (who was depicted in the anime as particularly greedy) noticed Mario's possession of the Brooch, eagerly identifying it as a mystical gem passed down in Toad legend that guides the holder to a land of treasure.

Mario decides to pick up the phone to call directory assistance, and a voice on the other end instantly says that he will fetch Mario. Much to both the brothers' dismay, a strange dog-like creature named "Kibidango" soon showed up instead, engaging in a scuffle with Mario and running out of the store with the Brooch in tow. The Mario Bros. gave chase to the dog, eventually retrieving the Brooch after they stumble upon the Mushroom Kingdom. The voice on the other end of the telephone reveals himself as Kinoko Sennin, who tasks the brothers with the great mission to rescue Princess Peach. By the end of the film, the Brooch was returned to Princess Peach, and Peach comments that it was very important to her since she has owned it ever since she was born. According to legend, the prince who has the other Brooch will make a wonderful pair. Shortly after Peach put it back on, it reacted to Kibidango (who had previously been cursed by the Koopa and turned into a dog) and transformed him back into Haru - a prince of Flower-koku who holds the gem's counterpart around his neck, making him Peach's fiancé of sorts.

During the events of Super Mario RPG: Legend of the Seven Stars, the Brooch is acknowledged during the attempted marriage of Princess Toadstool and Booster. When Bowser and Mario burst through the Marrymore wedding chapel, Booster's three Snifits are knocked into Toadstool, who slowly realizes she has dropped her Shoes, Ring, Brooch and Crown. Upset, she then cries hysterically and does not respond to anyone. Three of the items (including the Brooch) are recovered by each of the Snifits, but the Crown is still missing. Mario must take each accessory from them and find the Crown to stop her tears and make her come to her senses; doing so in a speedy time results in the best outcome of the princess kissing her hero.