Okay, so I just started an account, The Year Of Luigi is over, blah blah blah...

I apologize if there is no pic above... Or below...

But here's the real reason I'm writing this article:

File:Super-mario-wii-u-640x439
Which side will you choose?

Yeah, I REALLY want these games Nintendo. Here's some Ideas:

Super Mario Galaxy 3: Judged by the cover, Co-op. Not the stupid Luma, but Luigi on split screen! Purple Luma could be the new Co-Star Luma, Played on the Gamepad. The setting could be that Bowser did something to the sun.....that's evil....

So as you see, the game Ideas are cool. And sense I have nothing else to say, here is a pic of Mario as a Gansta.

As soon as you can, please move the above content to your userpage. Thanks.

Do you know how to add files? It's easy. Go to the file page, find the title, copy and paste it, and then put it in brackets. If not, upload it and follow the directions carefully.

By the way, speaking of Super Mario Galaxy 3, there is a work-in-progress hack that allows simultaneous play between Mario and Luigi...

Rememeber how I just started an account? I'm not an AUTOCONFIRMED USER yet.

As for files, here goes nothing...

Good news! It worked! Bad news! THAT WASN'T THE PIC I WANTED.

You do NOT go around in this wiki and pretend that I was the one who typed the message. It's totally unacceptable and it nets you this warning. Do not do this again.

Impersonating a user is actually a level 3 offense, so you could've gotten a {{lastwarn}} instead.

I try to be nice and forgiving to everyone (even though I think I'm not forgiving...lol). That's why I didn't give a last warning. Please do not get on my nerves or take advantage of my kindness.

a lot of the edits you have been making are worthless and have been undone and you already have another warning. WooftheChomp (talk) 18:44, 5 January 2014 (EST)

I am sorry for editing comments without proving that I edited. How do I edit without doing this?
The preceding unsigned comment was added by The Mario Man (talk).

Please remember to sign your comments on talk pages. ~~ Boo4761 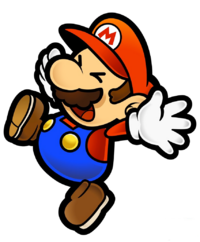 Why did you delete my CreepyPasta article?

It's fan material. We don't allow fan-material on this wiki. Leave this on your user page

File:SadGoombaBlue.jpg
WHY U SU MEAN