Discuss your thoughts and ideas about Game & Watch Wiki here! 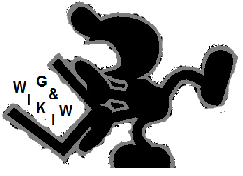 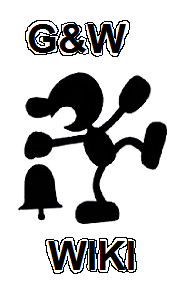 So I took a look at Yoshi Wiki and decided to use it's host for Game & Watch wiki. If all goes according to plan, the wiki should be created by tomorrow. Hooray!

Game and Watch Wiki has been created! You can find it here!

I've moved it to Wikii because the previous host has uploads disabled. I'll put the link up soon.

*sigh* The day you are banned from here will be the happiest day of your entire life. But for the rest of us, it is Tuesday.

Don't worry, I'll always return in someway shape or form. I have a text document of the users who despise my actions so I know who to come back to. Even the 5th grader up there is more of a man than you will ever be. --Mechawave 19:56, 11 October 2011 (EDT)

I gave him a Last Warning, but in all honesty, I don't think some of your comments exactly helped the situation either. Next time, it would be better if you come to one of us immediately, as opposed to leaving your own comments which could potentially make the situation worse than it is.

Just so you all know, I'm going to change the use of "beta" in beta elements to "early" cause thats the correct term. I'm doing it on the weekend. I'm not moving the page title though, because though it's misuse, people will search for Beta Elements.

Then Nintendo needs a dictionary.

Plus, beta makes us sound like tech geeks or something, and I'm always in favor of that... Bop1996 (Talk)
It also makes us sound like idiots, once you realize we've been misusing it all along. Beta is more akin to a point in development, and since we don't know when that exactly is, early is what defines it. Besides, beta is more akin to a prototype, which certainly doesn't work.

That and the fact that beta is commonly accepted online, even if it may be incorrect (surprising, eh?), meaning that more people would probably understand beta. Bop1996 (Talk)

Hey, what's up? do you play Mario Kart Wii WFC? if you do whats your mario kart code? Mario7727 (talk)

Sorry, but at the moment, I currently do not have Mario Kart Wii, and thus, I am not available for WFC. If I do get the game, I will tell you along with my friend code.

Thanks for telling MechaFail what he is worth. Niiue - Who has lost his tail?

Phoenix asked you nicely, but you ignored him, so now we're telling you: don't butt in on other users' arguments with your own insults and commentary. You're breaking the rules as much as the people you're flaming, and making the admins' job much more difficult because now we have to deal with you too. - Walkazo 00:26, 20 October 2011 (EDT)

I think you mean Block List, but yes, I noticed that as well. Unfortunately, no, so we'll just have to wait until the record of that disappears roughly a day from now...

You just issued a warning to the same user that I did for exactly the same reason, so you should probably remove it (I don't think I can as I didn't issue it, even though I know it should be removed). Bop1996 (Talk)

Your bursts of incivility, including this, are getting disruptive. It is beginning to verge on harassment. You were warned about this before, but I will not be placing an official warning template here. Please do not continue to head in the direction you are heading currently. Thanks. --Bryce

What? I don't understand.

There's a section about in help. MarioWiki:Userboxes

YAy! Can I be a sysop on it? I'm your friend after all. If you don't know how to promote people, go to Special:UserRights on your wiki. PikaSamus (talk)

You've already asked. I don't have it. I'll tell you if I do.

My mistake for making a small edit on a large page. Blame the browser, and my stupidity for forgetting about this issue.

Just getting my 10 edits out of the way![edit]

Hey Nintendo64Fan!
I just trying to mark at least 10 edits on my contributions page so that in a weeks time, I will get auto-confirmed right away! This will make my 7th edit and 3 more in order to complete my goal. User:McAusten! · talk to me · my edits 18:35, 13 December 2011 (EST)

Very Important Message similar to the one above This was excessively bitey. Please do not treat newcomers in this way anymore. --Bryce

Sorry about that. I'm not good with newcomers as you can see, but I'm trying to improve, though it hasn't been really successful.