I found a place in my day that I can be on wiki!

a wiki for the Koopa Troop

It was a joke.

HI HI HI HI HI! I'M SO HAPPY *IMPLODES* TO BE BA*IMPLODES* ON THE WI*IMPLODES*KI! What's up since I was gone?

Whenever coming the new adventure comic and the new smas bros. comic?

They're working together on one. Confused writes, WL makes the pictures using Photoshop. Wa

Ok, I uploaded them.

You can use mr. L (it has more sprites by the way.)

Sure, wherever you are. :D Gimmie a sec to update my userpage, and I'll be there in about 15 min. OK?

WOAH! LOLOLOLOL! HOW DID YOU DO THAT?! That is the funniest thing I've heard yet. User:3djeong/sig

Sorry about that chat room we were in, I was too busy finding pictures from various source and I didn't respond...

RAP... I should have to turn the speaker on, Wonders...

Hey, there are 2 new sockpuppets. Should I block them now, or wait until the do something?--

you know those passports from mlss right? well im making one some what user based. so all i need is your favorite number, (or any number that would represent your level) a buddy (probably 3d) and a sprite pose.

Do you have a singular number 22 is a little big, it covered your face, do you like 2?

ok, almost done, but i need one more thing, pick a location out of these: 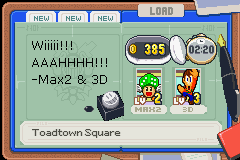 u kan put stuff in the empty space.

I never accused Murzon of anything, but the fact of the matter is that they have the same IP. I've unblocked the IP for now, but something may have to be done if we keep getting troll attacks from that IP. --KPH2293 17:39, 23 April 2007 (EDT)

Me too, also. TABS ROCK! BAHAHA! Gullible parents, too, also.

OH NOES! THE SPIDER-MAN 3 ADVERTISING AND MERCHANDISE IS SLOWLY STEAMROLLING US!!!!! AAAAAAHZOR!

iDog bitten by a radioactive spider. IT'S TRUE. It's official merchandise.

Neither can I, to be truthful... ROFLOL

Seems that Peachycakes II has found Fantendo...we can't block the IP because it is shared with Murzon, and we can't check IPs. Plumber

Actually, Murzon said that was his cousin.... Plumber, She was a fanon troll? I thought she was a spamming troll.

Eh, I wasn't there so I didn't know about that. This is a different person anyway, and their unblocked now. Plumber

Shure, why not! (Unless it's the spamming kind) Plumber

Thanks for sticking up 4 me.

It isnt fake and check the german mario party website and see the details.F g

Just google it as "marioparty.de"F g

3D, you're a good GREAT friend.

Yay! Adding the new sig pics took up all my other PI space.

BTW, I just noticed your forum sig. BEST. ONE. YET. *passes out from ROFLing*

as your PI? Right now, it's 3D's which is over teh limit mahn... Plumber

Thanks for trying to stick up for me... about Peachycakes II, I heard your comment about how she might be an accepted user soon. I'm going to allow her on here for a short time, to let you guys see if you think she should be trusted. If she starts spamming, block her account for 24 hours. I think we'll be able to make her acceptable...