If Someone Starts Typing Here, I Will Die. GO AHEAD, TYPE AND KILL MEEEEEE HUAHAHAHUHUHUHAHHAHAHHA!!![edit]

You are an idiot. I shall now hate you for life. I HATE YOU, YOU UGLY BEAST!!! Go back to your smelly, repulsive, damp cave you smelly monster.

P.S. When you were born, a planet that supports life (but we didn't discovered yet) exploded and 323,343,324,234,532,653 bird species went extinct. Also, your birth set off a mass eruption that killed everybody in village Teiesan. What do you got to say about THAT??

P.P.S. You are now cursed by the ElGeeEm divine Aphelocoma californica. Your curse is that you will eventually marry Wario someday. Muahahahahahaha!

P.P.P.S. You are now bestowed with the curse.

The curse will be lifted. But I will inflict with another curse called the SUMFOL&HFIB. You will eventually marry Luigi someday. And get bombarded by red shells. Hahahahahahahahahaha. Just kidding. KS3 (talk · contribute)

Aphelocoma californica . I hate this user. (No I don't. I know her. She won't get hurt. I promise).[edit]

Type that in Google Images and see what you get.

Anyway, your logic is flawed because I was born before you. But RIGHT when you were born, an earthquake hit and collapsed a building. There was an ugly dog inside there. Its blood spilled. Baby Luigi spawned out of that (his debut appearance was in 1995, the year of destruction, depression, anxiety, war, sadness, and hatred. It's the date you and I were born. Worst dates ever in the history of history.

Don't think I'm jealous of you. Because I am.

Does it hurt to tell your friends that it is MY birthday too?[edit]

Does it hurt to tell your friends that it is MY birthday too?[edit]

Baby Luigi is overrated. I sometimes hate him because you give him so much attention. Why the hell Baby Luigi is a featured article before Mario? Now, if Baby Luigi was nominated for unfeaturing an article, I'd be overjoyed.

Fun fact: French people say "J'ai chaud" when they are hot. Literal translation? I have hot.

I am worshipping Baby Luigi[edit]

Check out the FI rules[edit]

From now on, unless we nominated the article, we are not supposed to add a reason why we support.

Lame. But it saves more time than typing it all up.

First of all, MKC is Mushroom Kingdom Currency, not Mario Kart Combo (another one of my dream games)

Your "This is a false sentence" in User Talk:Fawfulfury65 and other random stuff[edit]

I heard that everyone is going to team up against Wario, Luigi, Mario (Fictional Character, not Snowboard Cross Olympian), and Peach. Why Luigi??? Because he is my least favorite character. Why Mario and Peach??? It's their alter ego. Luigi created it. (actually a he she.) Baby Luigi is way better then Luigi. I usually control 2 remotes and kill Luigi and Wario in Grumble Volcano. -KS3 (talk · contribute)

PS: The PS on the bottom is false.

PPS: The PS above is true.

PPPS: The PS above is false.

PPPPS: The PS above is true.

PPPPPS: The PS above is false.

PPPPPPS: The PS above is true.

PPPPPPPS: The PS above is false.

PPPPPPPPS: The PS above is true.

PPPPPPPPPS: The PS above is false.

PPPPPPPPPPS: The PS above is true.

You know that picture you sent me? Would have been much better if everyone else got at least 50 coins.

Today, I saw a squirrel and a scrub jay. The cute little blue thing was following the squirrel.

And in case you were wondering, I didn't see the chicken today.

I think some people don't understand what the heck am I talking about.

Mushroom Kingdom Planet (or whatever) should think about terraforming Earth. They can get rid of global warming for us. We pay back by worshipping the residents of Mushroom Kingdom, especially Mario and Baby Luigi.

Mario and Baby Luigi are so awesome, they could win in a fight against Master and Chief.

P.S. I still hate you, you know. Don't think I forgot what happened yesterday.

P.P.S. They forecasted refreshing, cool, relaxing rain, but I see the hot, blistering, bone-dry sun outside. I EXPECT RAIN, NOT THAT STUPID SUN!

I love Corvus brachyrhynchos too, you know.

Kamek doesn't deserve to be a separate character. He is just some stupid female magikoopa with a name. What a moron. He sucks. I hate him.

What if Baby Mario and Baby Luigi were in Melee? That would be so awesome. I could throw a bomb at them and turn them into a star.

BTW, turning people into stars is the best part of Melee.

After I read that, I started to feel sick of garlic.

Actually, I like garlic, ONLY if it's used to flavor bok choy or cabbage. Otherwise, I hate that unpleasant odor from garlic. Besides, I wouldn't eat something that's shaped like Wario's nose. EWWWW!!!!

I love crows. They don't deserve the hate. Crows are one the few birds known to play fight. That's cute.

I'm a girl and I HATE Twilight[edit]

For those who think all girls love Twilight, you guys are absolutely wrong. I hate Twilight. I hope the author of this pile of crap burns in a fire. Seriously, Twilight is nothing but cheesecake, blueberry smoothie, and huge giant pieces of 80 percent cacao dark chocolate.

And if I offended any people here, well, you guys can keep your opinions. Not every girl likes that cursed black textbook.

Which one. The one by Erin Hunter or the one by Stephenie Meyer? KS3 (talk · contribute)

What's the Scientific name of yoshi??

What's the Scientific name of birdo??

What's the Scientific name of Koopa Troopas and their varients???

What's the Scientific name of Goombas and their varients???

PPS: I know this person in my school who's name is Daisy.

Your talk page is screwed up[edit]

Now that we got that out of the way, I have to ask: if Baby Luigi is your favorite character, why would you like to see him on fire? Hello, I'm Time Turner.

But Kamek is better for SSB. I mean, Kamek has shown tons of moves, while the most Baby Luigi has done is hit a baseball with a bat. Hello, I'm Time Turner.

Sorry that I once again replied like seemingly 2 years after your comment (I really gotta stop doin that :3)

I suck at Mario Kart Wii. No matter how hard I try I'm never able to unlock Dry Bowser. It's like every time I'm in first, some trigger goes off and everyone keeps bombing me with Red Shells and Blue Shells and whatnot. The only item I like is the POW block, which you can eaisily dodge by shaking the wheel (but you probobly knew that already). The CPU's dont, so I can pass them that way.

The reason why I changed my name is because first thing You ever play mario kart wii wifi?? next to the vs thing is the number that never exceeds 9999. It is called vr. My old name has "68066vr". It was a typo error. It was supposed to be 6806vr and My Mario Kart Wii license is KS3 anyway. Second thing, I already said it in the last sentence. Third thing, you won't be able to see me on Wi-fi anyways these days because I don't have that much time. Fourth thing, You And NotRightyOppositeOfRedThePersonWhoGotSeventhOnSnowboardCrossInTheVancouver2010OlympicWinterGamesMinusFuchi Need To Get Along!!! Fifth thing, what is the actual scientific name of Cheep Cheeps and don't make them up (ask wikispecies). Sixth thing, what is the actual scientific name of Shy Guys and don't make them up. -KS3 (talk)

PS: I don't think that yoshis is distorted. Well the yoshi named Yoshi might be distorted, but Kamek and Luigi suck. So does Waluigi and Wario.

PPS: I know this other person named Mario. Did you watch the semifinals of Snowboard Cross in the 2010 Olympic Winter Games at Vancouver??? Then you should know. I also know this Mii named Yoshi for some reason.

I NEED THE SCIENTIFIC NAME OF A T-REX!!![edit]

Sorry this message is 4 days late I just couldn't do it in time.Here's a Birthday image 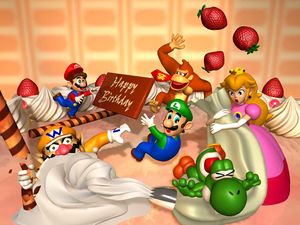 The candles aren't lit because they used Baby Luigi to put out the fire!

I wasn't thinking "God". That was one of his creatures and he threw it at me!

You should've seen the way Time Q acted towards me. He humiliated me AND he rubbed his vote on my face. It might not be flaming or trolling, but he really hurt me.

WHY DOES THIS WIKI HATE ME? No, really. I feel like I had vandalized something.

Heck, I feel like Luigi and YOU are Mario! Darn. How ironic. I like Mario more than Luigi and you like Luigi more than Mario, but we act opposite in real life! Funny, we're both twins and I'm older and shorter than you (but absolutely NOT fatter.)

Wario is full of fail, IMO. Let's blame everything on him.

Anyway, how about I end this message with Wario facts?

Wario is so fat, a space ship could see him CLEARLY from space.

Wario never dies of a heart attack because his arteries aren't made of muscle; they are made of LDL cholesterol. Which means the more LDL he has, the better for his arteries.

Wario is so fat that if someone tries to shoot Wario, the bullet will bounce off of Wario's fat and hit the shooter.

Wario is so smelly, he makes a lush rainforest transform to a wasteland filled with wilted plants from miles around him.

Wario is heavy, the aliens cannot abduct Wario. Why would they anyway?

Wario is so smelly, he makes the paint peel off the walls.

Wario's poop is not radioactive. It's super-ultra-megalicious-radioactive. If anyone gets a whiff of it, he/she will dissolve from radiation. That's why we never see Wario poop.

Wario is so ugly and stupid, scientists don't even consider him the same species as humans.

Wario is so fat, even the car-crusher thing will break.

Wario does not have a voice. It's actually his own snot that got shoved down his throat vibrating from Wario's bad breath.

Wario has kidney failure. However, if a kidney gets transplanted into Wario's body, the kidney will explode because of Wario's corrosive urine.

Wario had heart failure so Waluigi gave a (girly-pink) pacemaker made out of partially hydrogenated interesterified fat.

(These Wario facts should go somewhere else, right? How about your userspace. And credit to me would be nice. The one where scientists cannot classify Wario, the Red Shell dude made it up first.)

Aphelocoma californica and other random stuff[edit]

The curse is the one that the person with about 68 thousand red shells made up and the person who is the left handed green mario made up combined.


Now RightyRedLuigi's huge wall of text coming up (and part of Red Shell 68066vr's too)...

sorry it took a lot of space -KS3 (talk)

PS: This curse has been inflicted by RightyRedLuigi (look at section 1.2) That's why you have this huge wall of text on your talk page.

You probably have to archive this user talk page[edit]

The reason why is because of the scrub jay curse thingie that put a huge wall of text on your user talk page. -KS3 (talk)