Hi, everybody. Welcome to my user page. Here's some stuff about me and the Wiki.

I discovered the Mario Wiki in very early 2007, and was fascinated by the idea; a fountain of infinite Mario knowledge! I've been big on Mario's games my whole life (which is only, ahem, somewhere between 10 and 20 years in the making), since I'd been playing my dad's NES and got my own GameCube. Due to my general lack of common sense, it wasn't until May that I realized I myself could contribute to this Wiki. And so, on May 30th, 2007, I joined the community. Immediately I began editing and even creating some articles.

Eventually I discovered that this Wiki had something that only made it better: a forum. There I met the wonderfully demented likes of Smiddle, Uniju, Moogle, and some others. I put up a conversation every now and then, but mainly enjoyed the whimsical nonsense of the longtime users. The forum really distracted me from the Wiki itself, and eventually I took off for two reasons: 1) I was determined to do a lot more work a few articles in particuluar, and 2) I had already been frequenting a different forum for over a year. The forum is not exactly a regular part of my internet browsing anymore, but I still pop in sporadically.

As I continued working on the Wiki (and being gawrsh-danged proud of it), I soon noticed a disturbing pattern. Nearly every article I read was unbearably sloppy. The smart thing to do? Edit it, of course! But did I do that? Nope! I decided that this project was a little overwhelming for me and I took a long break starting in 2008.

I still read the Wiki a whole lot - in fact, on one of my computers, it's actually my home page. I edited on occasion, but not nearly as often as I did when I first joined. And then I came across something that blew my mind: the Homestar Runner Wiki. For those who are uneducated or just have lives away from the internet, Homestar Runner is a web cartoon that's been going on for nearly 10 years. It's very humorous, and sometimes tends to be idiotic - right up my alley! I read the articles upon articles about the cartoons, the characters, everything. I learned so many things about the cartoon I had no idea about. And then... I joined their community. Under the name NMRodo, I had officially disappeared from the SMWiki. But not for long...

Mario games, for an extremely brief period, actually became sort of boring to me. I was more interested in Animal Crossing: City Folk, the New Play Control! edition of Pikmin, and of course, Homestar Runner. But then guess what I found out about unbelievably late: Mario & Luigi: Bowser's Inside Story. I picked up the game around late September and was playing for weeks. Then I remembered: "Wasn't there a Wiki or something on this?" And so I came back to the Mario Wiki, to fix up some things that just needed improvement, and take pride in it. My time is now split between the Super Mario Wiki, the Homestar Runner Wiki, and school. In order of most to least importance.

So that's my story. You probably didn't read it. Or this. But in any case, there you go. 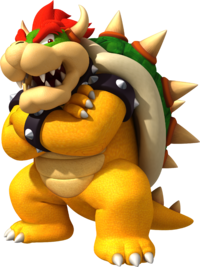 Last but not least

Is it me or is this artwork of Bowser really awesome?

Well, that's about all I got to say. What, were you expecting like a giant page of a hundred animated GIFs or something? Or about 10 dozen LOLcats? Nope. I don't have that much patience. Bye now!