From the Super Mario Wiki, the Mario encyclopedia
< User:LED42
Jump to navigationJump to search

World 5-5 is the fifth normal level, and the seventh level overall in Sky Land from Super Mario Bros. 3.

Almost the entire level is made up of Donut Blocks. Mario starts on a Hard Block, some Koopa Paratroopas and a Paragoomba are nearby. Afterwards, there are some more Hard Blocks, one of them with a power-up inside, some Brick Blocks blocking Warp Pipes, and some ? Blocks, one also containing a power-up. These are guarded by another Koopa Paratroopa and two Fire Piranha Plants. Shortly after this, there are two rows of coins, along with a Flame Chomp. There are also some Fire Piranha Plants, as well as Hard Blocks and Brick Blocks, two containing power-ups. This is followed by a Paragoomba and some more Koopa Paratroopas, after this, the player reaches the goal.

By entering the second Warp Pipe at the beginning of the level, the player can find a bonus area with some coins and a Tanooki Suit.

The level's full layout in the NES version. 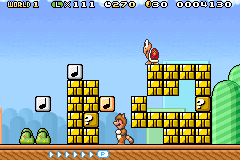