From the Super Mario Wiki, the Mario encyclopedia
< The 'Shroom:Issue XXV
Jump to navigationJump to search 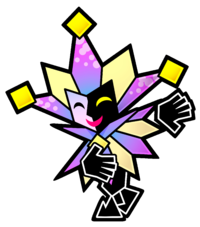 Hi, I'm Mario304 and this is my first Character Comparison, a comparison between two magicians! They both betray their master at the end but what is so different about them? Read below and found out! Hope you all like it!

Dimentio is an evil clown and wears everything a clown has. He has the jester outfit and black hands and feet but what makes him cool is his face. His face is shaped like a mask, with it having two sides, a light side and a dark side of the face.

Ok, Beldam is a witch, as you can see. She has the blue witch hat, grey hair and the evil cackle. Nuff' said.

It is unknown where Dimentio is from but he did join Count Bleck to put his own plans into action. He is first shown as a minion of Count Bleck but was actually secretly using him so Dimentio can become king and control Luigi at the end!

Beldam was a servant of the Shadow Queen, along with Marilyn and Vivian and wanted to serve her again after she was locked up. She lied to Sir Grodus, the X-Naut leader that the Shadow Queen serves whoever revives her. Wow, Grodus actually fell for it!

Dimentio has a lot of magic attacks. He can shoot Magical balls, teleport, create a box around the player, flip between dimensions and can even create duplicates of himself!

Beldam, like Dimentio, has some magic attacks too. She can create a blizzard that sometimes freezes Mario, make her allies big and the enemy tiny, can slow down time, make her allies go really fast, can poison Mario and can punch Mario with ice.

Dimentio is very evil and intelligent. He always smiles (except when he's defeated), throws insults at people and is always calm. Dimentio also loves power and control and he doesn't care if he kills someone.

DIMENTIO- I know, Dimentio is awesome. He is clearly more evil and smart then Beldam. Unlike Beldam, Dimentio actually helps both Mario and Count Bleck while planning to betray and destroy them at the end. Sorry Beldam fans out there.