From the Super Mario Wiki, the Mario encyclopedia
< The 'Shroom:Issue XXII
Jump to navigationJump to search 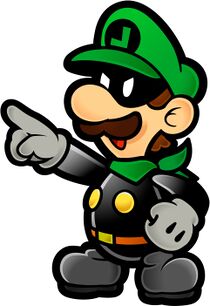 As readers may already know, I’ve been advertising, in the past few issues, that your ideas that are submitted to me might make it to the section. You can do that via my talk page or at the topic at the forum called “Character Comparison Ideas”. And yes, this is the remarkable first time I’m using somebody else’s idea. Kudos to you, White Knight! Anyway, Rookie vs. Mr. L. I like this. It is essentially the kind of comparison that gets very interesting. They seem unrelated, from different games and such, but yet have much in common, and much in contrast. Here we go.

Oh by the way, when I say Rookie, I’m talking about the Bowser one; I hope you got the message by looking at the big pixellated picture on the left up there ;) . He basically has all of Bowser’s characteristics, to put it simply. The biggest characteristic is the blue mask on his head; Popple also has a mask on his face. Rookie’s other notable detail is his hammer, which he frequently used in the battle(s?) against the Mario pair. Otherwise, it’s just Bowser. Nothing else to say, really.

Mr. L has one of the sickest (in a good way) costumes in the game. His handkerchief, his mask (also apparent for Rookie), and his gray gloves. His logo, the backwards L, is also relatable to him. Otherwise, he is very much similar to his alter ego, Luigi. There’s more or less to compare about the characters to their original selves than to each other, but it’s still interesting to see what physical appearance changes can affect the whole mood and character of a character.

So this category discusses the original versions of the two unique characters. First, starting with Bowser. Bowser had never been the main villain in Superstar Saga in this point of the story. In fact, he was on Mario’s side, trying to get the Princess’ voice back. So, we could say this is one of those cases where an ally, or somebody thought to be as an ally, betrays you and goes to the other side. I actually don’t remember how Bowser got on the bad side(sorry!), but Luigi was also on Mario’s side in Super Paper Mario, until…

Mr. L is awesome. Probably one of my favorite characters of the game, really. From Luigi and Mr. L, a drastic character change, as well as physical, happened. So, good-hearted Luigi, who tried to stop the wedding of Bowser and Peach was trapped by Bleck and the like. But by the time Mario and his party were to meet Luigi again, he had turned in to the Mr. L most(if not all) Paper Mario fans know him as. Luigi later joins Mario as an ally in Chapter 7, with his awesome high jump.

This category should be fun. Actually, Mr. L probably had the more definite character, as Rookie only appeared once or twice in the game as Bowser. He hooked up with Popple to steal stuff, occasionally encountering the Mario bros, getting defeated each time. (Now don’t tell me you got a game over on somebody like Rookie and Popple. Really.) I also don’t really remember what happened with Rookie after that, as in, how did he become normal, but you could tell he was not recognizing himself as Bowser.

Ah yes, that Mr. L. Not only a bad@$$ costume, but a pretty funny character too. It’s funny because it’s ironic. Luigi is good-hearted, but yet cowardly. He is brave(did I just say that), but weak(er). Mr. L is the entire opposite. He is strong, arrogant, evil, you name it, anything that’s not Luigi in the slightest. He even had his robot, and Mr. L was sinister. But in a much humorous way. Great character, great game. Super Paper Mario wouldn’t have been the same without Mr. L.

While you were reading the comparison, you probably already have guessed who will win. So Click “Show” if you want a pleasant surprise.

ROOKMR. L – I just gotta give this to Mr. L. Although I do like Rookie in Superstar Saga, it doesn’t nearly amount to the greatness of Mr. L. It’s too bad we probably will never see either character in any future games, but I’m looking forward to more Luigi alter egos. (Weegee? *shot*)