From the Super Mario Wiki, the Mario encyclopedia
< The 'Shroom:Issue XXI
Jump to navigationJump to search 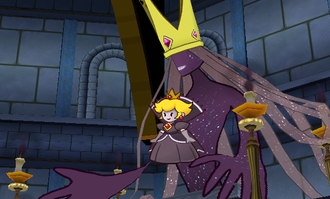 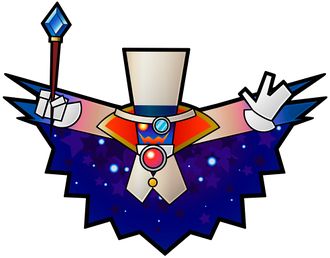 I love final bosses in the Paper Mario series(Now now, I’m just considering the people that might not want spoilers. But, actually, I will warn you that yes, there are spoilers in this Comparison from Super Paper Mario.). They’re so great, it makes me not want to save after I beat them, just so I can fight them again. Both Paper Mario, but yet a different genre of gaming. Enjoy.

I think I’ll be tending to compare more of the “actual” SQ than the Peach version of her. She looks interestingly abstract, and I’ve always liked the way her hands move around so paperishely. (argh, just describing it is making me want to play the game!) She has the crown, the hair, and everything is a purplish cosmos. Also, in the artwork, it looks like Shadow Peach is wearing black, but she is in fact wearing all purple, same crown as the Queen and all.

Count Bleck looks simplistic; but in fact, his also present abstractness is what makes him look cool. This can be said for both SQ and Bleck. The top hat, the monocle, the red eyes, the mouth shaped like Wario’s ‘stache, and the oddly shaped hands and head. All great stuff. He also has a wand-like thing in his hand. His cape is frequently seen both open and closed, mostly open in aggressive stages. Inside, you can see a vest-type thing, and yet another, space-themed, world in his cape. Gee, these two may have more in common than we might think.

Well, as many of you already know from playing the game, Paper Mario TTYD was all about Mario trying to open the Thousand Year Door, and get the treasure behind it. But alas, life ain’t that good, he revives the thousand year old monster lady(You’d imagine the paper to be wrinkly), and she attacks him. Pretty interesting, indeed. I think I would have been more surprised if some book hadn’t told me about her…

This guy has a very interesting history as well, which is gradually foreshadowed throughout the game, and the truth is revealed at the end. (Spoiler alert!) So, before becoming his crazed self, he was actually a refreshingly true man. And of course, Tippi used to be Timpani, yaddayadda. Blumiere fell in love with the human girl, but as a member of the tribe of darkness, he couldn’t(typical Romeo & Juilet jazz). However she suddenly disappeared, and so he became furious, and chaos rang. Anyway, the ending was very pretty, great game.

I don’t think her character itself is very emphasized. She only appeared in the last sections of the game, but the only thing we could ever know is that she is evil. She was sealed behind the door for a thousand years, so what can I say. Uh… gee, I wish I’d chosen a different category. Most games’ final bosses are always totally evil, anyway. Forget Mario vs. Donkey Kong.

Blumiere was a thankful man, and perhaps rebellious. This sorta ties in with the history section, but he revolted against his father to fall in love with a human, and eventually destroyed the dimension, after stealing the Dark Prognosticus. So, despite seeming evil in the sense that he was trying to destroy the whole universe(dimension, correction), he was still kind-hearted(sorta). Another way to look at it is that he didn’t care about anything except for himself and lady Timpani. But it all worked out in the end, since Bleck and the others ended with good terms, and a happy ending.

This one was hard to write about, personally, and took me a while to finish(thus the lateness). I like both games, both characters, and plots. It’s all opinion, but based on the comparison, this is what I come up with. Click “Show”!

COUNT BLECK – One of the biggest reasons for my choice is the background history of Bleck. I don’t think any Mario game has gone as far into an antagonist’s history, including flashbacks(which later proves he is not the antagonist). You know you can’t wait for another one of these Paper Marios to come out!