From the Super Mario Wiki, the Mario encyclopedia
< The 'Shroom:Issue XXI
Jump to navigationJump to search

Sorry for the lateness...

This game features some interesting removed features, and here they are: 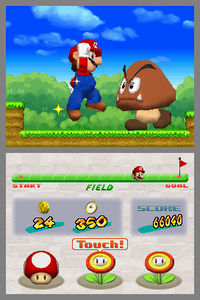 An example of a Mega Goomba as a regular species.

1. The Mega Mushroom was much harder to get, considering that Goombas and possibly other species can actually steal Mega Mushrooms from the player. The enemy would grow huge similar to how Mario or Luigi would, and be able to trample anything for a limited time.

2. A Co-op mode was going to be included for two players. The team of Mario and Luigi would be able to actually progress through the game with eachother, with all the same functions as a normal game would have.

How to get a Blue Shell.

3. At first, the only way to obtain a Blue Koopa shell was by defeating a Blue Koopa itself. When the player stomps on the Koopa, they can then Ground-Pound on the shell and become Shell Mario.

4. Three items were going to be allowed to be stored on the bottom screen, instead of the final one. This meant more power-ups to prevent the player from losing a life.

Interesting features, but the truth of them brings them to real perspective: 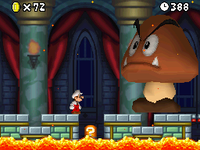 Mega Goomba, where he should be!

1. Now that would make the game a challenge. I mean seriously, a Goomba stealing a power-up is pretty hard to avoid. Just imagine missing a Mega Mushroom by the slightest bit, then having it bump into a Goomba. That would eat at my nerves, if you ask me. I'd say it was smart to leave the Mega Goomba for a boss.

2. This would've made the game ten times more awesome. I mean, who wouldn't want to play all the levels with their friend? Co-op has always been a fun addition to any game, and this would've been no different.

4. Three items would've been paradise. Every time you were going to die, you just use that Mushroom you were saving for a while! This may have actually been kept to accommodate the Two Player Co-op mode; the three slots were used for both players. But because the Co-op play was removed (probably to make room for other features) the three items were removed as well.

So overall, these elements have been quite iteresting, but I have to say numbers 2 and 4 are for the better. Co-op play would've been awesome for this epic game, and three items would've made getting every Giant Coin and such a breeze. But having to defeat a Koopa for a power-up was smart to get rid of, (actually it is kept alive in VS. Mode) and giant generic enemies would've made the game very tough! I'm glad they kept the giant, power-up stealing enemy idea for Super Paper Mario! Well that's all for this month! See you in the next edition of Beta Elements!