From the Super Mario Wiki, the Mario encyclopedia
< The 'Shroom:Issue XX
Jump to navigationJump to search 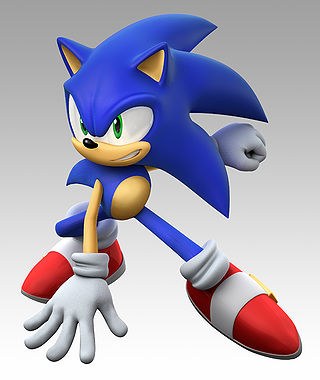 AHHHHHHH!!! I’ve really done it now, haven't I? This comparison is gonna make more enemies for me than the Daisy one did! Anyway, yeah, there are many Mario fans, Sonic fans, Sonic haters, Mario haters(?), and Waluigi lovers in this wiki. I'm not coordinated enough to please all of you, so let's see how it goes. By the way, there is a thread on the General Discussion board at the forums where you can give me suggestions now.

What can I say? Anybody could easily picture “The Mario” in their head, and many of you probably have tattoos on your back of Mario. Red hat, overalls, blah blah. We've actually seen Mario mostly naked before; the time that Toad nearly fainted in doing so(for those of you who didn’t catch the reference, superstarsaga). But it’s mostly the ‘Stache. Nothing can beat it. Nothing. It's one of the main reasons Waluigi won against Daisy a while back. So, his outfit is original and cool, but he was too stupid to choose the lousy red suit; THE GREEN ONE'S THERE TOO!! Nah, Luigi is more qualified for green.

Hedgehog, blue, little wrist bands or whatever, yeah, your basic Sonic the Hedgehog. He, with the exception of the little wrist thing, is entirely naked. LOOK AWAY, CHILDREN!! Aaaanyway, there’s really not that much that can be said about the hedgehog. I mean… what, yellowbelly? Does that signify he’s weak? Also, one thing I must mention; awesome shoes. Those things are badass. Honestly, he has buckles on them. Golden ones. And they’re red. If there’s one thing I love about Sonic, it’s his shoes. I want those shoes badly. Another thing I must say about Sonic is; where are his spikes? Are those blue hair things his spikes? I guess it hardly matters, but hedgehogs aren’t supposed to run really fast, nor do they have opposable thumbs.

SUPER MARIO BR*shot*. Donkey Kong is the correct answer. Anyway, we all loved watching Mario get run over by barrels, get his butt lit on fire by trouble bugs, picking up umbrellas or handbags and whatnot. What a classic. He wasn’t even a plumber back then. He was a carpenter. He was probably better off too; does Mario ever get paid for his work anyway? Anyway, he saved his girlfriend(who mysteriously disappeared for over 20 years after that), defeated an ape, and was happy. Or at least that’s what everybody thinks.

Sonic the Hedgehog for the Sega Genesis. Another great classic. Dunno why Sega went way off-course in the more recent 3-d games, but that’s not the topic. Sonic the Hedgehog was a great game, but naming the game directly after the main character? Be more creative(like naming it after the main villain)! The objective of the game is entirely different from Donkey Kong, and it’s a newer game too. If anybody asked me which would I rather play, StH or DK, I would have to say Sonic. It’s a great game, fun fun . Anyway, since this is not the game review section, I will say that Sonic did a better job in his debut than Mario did. Amazing.

Mario, as before-mentioned, started as a carpenter, and then led his career as a plumber. Well, that is, only until he went into the wrong sewage pipe to come out in a land of walking chestnuts and flying turtles. He eventually had to rescue a stranger princess, but to his shock, a mushroom told him(Snake: It talks?; Otacon: Yes!) that the princess was in another castle. I mean, how depressing could that be? He had 7 more worlds to go after that long journey? And little did he know that he would soon be spraying everything with water, jumping around in circles, flying, becoming a bee, becoming paper, and run his own hotel in the future. I’m glad I was not put in his fate. Sorta.

Sonic set out on an epic journey to get rings and defeat a scientist named Dr. Eggman. Or as I like to call him, Dr. Robotnik. RINGS! Why? Well, then again, if someone asked me which was better, mushrooms or rings, I think I’d say rings too. Ever wonder what Sonic does with those rings? I sure don’t think he starts some sort of jewelry with that whole collection. Maybe they’re a type of currency, I dunno. Sonic, after much begging from fans and to Sega’s glory, was featured in Super Smash Bros. Brawl. BUT NO RINGS? Aw, c’mon. I swear, there weren’t even any Sonic-related items in the whole game, geez. But perhaps that’s what you get for being 3rd party, since I didn’t see any MGS items either. Perhaps.

Mario, Sonic, Sonic, Mario. There was even a game that was all about the two of them and their series. This should be quite intense. So, you know the drill. Click “Show”, and see the disappointment in all of the people’s faces that wanted the other plumber/hedgehog to win.

MARIO – I’m not sure what to say besides “Well, what did you expect?”. I can expect many people on a MarioWiki to hate Sonic, but I sure can’t imagine Mario haters on a MarioWiki. But don’t get me wrong, Sonic is awesome too. :D And I'm sure Mario and Sonic will once again appear some time, some place again in the same game, to prove their rivalry. It shall never end.