Welcome back! I was going to review a Pokémon character this month but I gave up on it (BTW, Misty got a 75%). So I’m moving on with my TTYD bosses. This month the boss of choice issssss Hooktail! 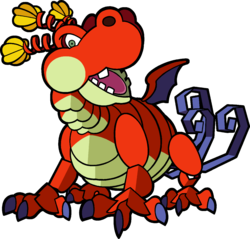 Hooktail is a wonderful addition to the storyline! Hooktail is the perfect guardian for a treasure, she appears in a castle, she eats ~people, it’s like the word “dragon” just appears in your mind. So naturally the developers stuck in a dragon :)

I also love the fact that there are three sibling dragons, it makes me happy. But what doesn’t make me happy is inconsistency, and the fact that Hooktail has a fear of crickets but her siblings don’t have any fears is very inconsistent. So I give her a 9/10.

Anyways, I think Hooktail isn’t that funny, but she isn’t really meant to be funny. I guess her fear of crickets...meh 7/10

Lots and lots! She could be such a great boss, dragons are awesome. There is so much potential when it comes to a ferocious beast. 8/10.

They could have given Hooktail more appearances during the course of the chapter, from what I saw, she appeared once or twice and then you have to beat her up. She could have appeared in different parts of the castle and then run off when you got there.

But she did appear several times in the chapter, and she was referenced multiple times again in the story so she gets 8/10.