Hey guys! Once again, I was busy and couldn’t write this section last month. But I’m back with my run-through of Paper Mario: The Thousand-Year Door bosses as a request from ralphfan (talk)! So here goes nothing. Next up on my magical template of bosses is...Blooper... Actually, I think I’ll do two bosses today; Blooper AND Gold Fuzzy / Fuzzy Horde (because they’re both minor bosses). 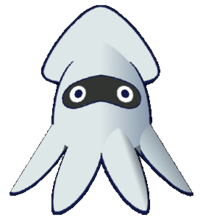 Um... there’s this Blooper in the sewers blocking the way, you hit its tentacle, and it gets mad. If that’s storyline, then I’ll eat my shoe. Though I will give it 40% because they managed to incorporate it into the plot.

Well I love Bloopers’ design and this Blooper is no exception. It’s an amazing take on a squid, redesigned to make it look more Mario-like. 80%!

Weeeelll...erm...Blooper has no lines. But Bowser does say “I swallowed a dang Blooper” and I did snicker the first time I heard that. But it’s still pretty pathetic – 10%

Trust me, in this case, the developers used all of Blooper’s potential. 100% 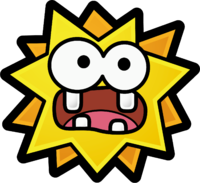 Well Mario & co. invade their territory and they don’t like it. So they attack him. Not much more of a storyline than Bloops up there but...meh. 60%.

Frankly, I hate the design of Fuzzies. The fact that this one is golden and has some sort of sun behind it...better but I still think Nintendo could have spent a little more time than making a scribble with eyes and a mouth. 70%. 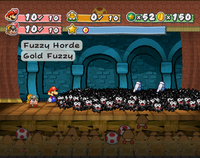 Face it, fuzzies just don’t work out when it comes to anything. They just aren’t good enemies. But I suppose that they could at least have made the dungeon centered around Fuzzies (like in the original PM). So the idea has some potential – 60%

Well considering that they appeared for one fight in the entire game, had no plotline leading up to them, and no reward after beating them, I’m gonna say that Nintendo used them because they ran out of characters. 60%.

Meeeeeork. So both of these amazing~ characters lost to the most amazing gang-member, Gus!