From the Super Mario Wiki, the Mario encyclopedia
< The 'Shroom:Issue XLII
Jump to navigationJump to search

Welcome to the Galaxy— ahem! Welcome to Mario Kart: Wheel Tips Corner. Here’s Coincollector ready to tell you the Mario Kart tip of the month.

OK, this time I came up with a potpourri of information about Mario Kart’s items. So I decided to use all that info to make a list of The Top Five Weirdest Items Seen in the Mario Kart Series.

There are a wide variety of items in the series, and usually we think that some items are more useful than others (thanks to the lousy random selection), but have you ever considered which are weirder? Yeah, those items that have a dubious use. Perhaps their function can be convenient for a player, but perhaps not. This month we will make a small list of those objects that make us think “WTF!?” 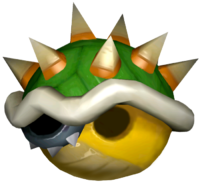 So you think you can deal with this, little guy?

5. The Bowser Shell: Yeah, Bowser’s awe‐inspiring, kart‐wrecking, nightmare inducing and destructive shell comes in fifth place because it’s an item the hits everything in its path when thrown, and I do mean EVERYTHING. Racers that are hit by this awe‐inspiring, wrecking… yadda yadda shell will drop their items and roll like marbles while the shell keeps going to hit something else (maybe the guy who used it!)

Why it’s weird: The Bowser shell can be quite useful to stop racers, but must be used wisely. Usually you’d throw it backwards to prevent racers from stealing your place, but if you think you are capable of using it offensively, you might experience a nasty surprise. Especially when the shell “accidentally” crashes into you.

4. Cape Feather: The feather comes in fourth, and maybe there is a reason why it is pretty weird. The feather only appeared in Super Mario Kart for the SNES and makes the user jump higher than usual, the driver making a fun spin as he leaps into the air.

Why it’s weird: Besides the fact that it made only a single appearance, the feather only appears in some courses. Even so, it’s hard to obtain. However, if you’re lucky enough to get one, you can use it to avoid any obstacle or make great shortcuts over gaps and even walls.

3. Thunder Cloud: “Isn’t that cloud over my head cute? Wait… what’s that bright thing coming from the—” *zap!!* “shoot”. In other words, the thunder cloud is a time bomb that gives you a pleasant boost, but with a chance to be struck by a lightning after and remain small for several seconds.

Why it’s weird: I never though you could get a real suicidal item like this during a race. The only way to get lose the bad luck (and the bad weather) is to play “hot potato” with the other racers to avoid the lightning strike. The only moment when this item can be useful is when you’ve almost reached the finish line on the last lap. 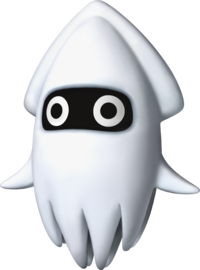 Better off served on a dish with some soy sauce…

2. Blooper: Use the blooper to spray some sticky ink into the face of your opponents and leave them blind.

Why it’s weird: Sometimes I wonder what the real purpose of this sushi‐ingredient‐thing is. You don’t get any advantage by releasing a squid which does nothing beyond spraying harmless ink that can be removed by washing your face and kart (or in this case, a speed boost).

1. Coin: The coin earns the first place because, as it name suggests, it gives you some coins when you use it… apparently, having a lot of coins makes you to run faster and not spin around like a topman if you bump another kart. Of course, you don’t need an item box to get coins, as they are also scattered on the road and you can pick them up.

Why it’s the weirdest: Obviously, the coin is one of the few things you wouldn’t expect to get from an item box (I mean, item panel, as coins only appeared as an “authentic” item in Super Mario Kart) and it becomes more ironical that you can get more in the road without going into an item box. Coins no longer appear as what they formerly were; now they are more or less spoils that can be used for hobbies— I mean, on missions, tournaments and battles.

Well guys, that’s all for Mario Kart: Wheel Tips Corner this month. And remember to look both ways before crossing the road, or else a Bowser Shell will smash you. See ya, ciao!