From the Super Mario Wiki, the Mario encyclopedia
< The 'Shroom:Issue XCIV
Jump to navigationJump to search

Hope you enjoy this section, and if you want to write for any section within Palette Swap, please don't be shy and sign up. 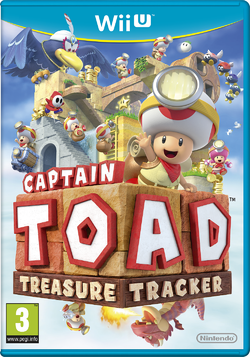 Happy New Year 'Shroom readers! This month I chose the European boxart for the cuddly new game to hit Wii U, Captain Toad: Treasure Tracker. On the boxart you can see Captain Toad doing various things such as: waving, climbing a ladder, falling down stairs, riding a minecart, carrying the Super Pickax, throwing a turnip and being chased by Draggadon whilst carrying a Super Gem. The boxart also features various coin stacks, a Shy Guy, some Para-Biddybuds, a Power Star, Wingo and Toadette. The interesting thing about Toadette is that like Captain Toad she is a playable character, and able to perform all the actions that he is capable of and yet she only appears once on the boxart whereas the Captain appears seven times. They both get a fairly equal amount of playtime together, so why she’s been sidelined is a bit of a mystery. Another mystery is why if Wingo is the final boss, why is Captain Toad not facing him? He’s instead facing Draggadon who later becomes an ally in the game.