From the Super Mario Wiki, the Mario encyclopedia
< The 'Shroom:Issue XCII
Jump to navigationJump to search

Welcome to my last 'Shroom, Mario Kart: Wheel Tips Corner! I've decided to stop writing for The 'Shroom, mainly because I don't have the time to write giant articles like this. In this final month we'll be going over some more fan-favourites, including some of my own, and some more stuff relating to Mario Kart 8's huge load of DLC. 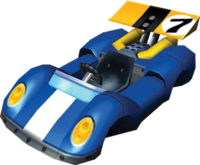 The Blue Seven is an unlockable kart body that appears in, well, take a wild guess. It's blue, and it has great speed, two things that seem to collide closely together in most games. It adds weight, and decreases handling and acceleration, which makes it a pretty standard kart, following the basic principle of speedy karts in Mario Kart Wii. It's shaped a lot like a real race car, and also has a resemblance to the Wild Wing in statistics and slightly even in looks It's a great kart if you want your character more like the characters in the weight class above you. Overall, it's best for characters like Metal Mario if you really want to speed away and destroy the competition or using Toad with average stats. 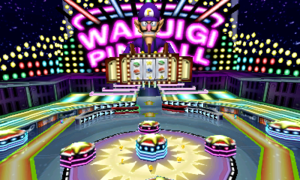 Waluigi Pinball is a track from Mario Kart DS and later Mario Kart 7. It takes place in a Pinball Machine(?) that was likely built for or by Waluigi. This leaves a very unique track layout and design, with lights, noises, bumpers and pinballs everywhere. Running into a pinball will knock you over, possibly losing an item, and the bumpers will push you the opposite way you were going. The courses heavily favoured karts with good, but not too good, drifting ability. Keep that in mind for Time Trials.

You're going to have to pay for that.

Where would the Mario Kart series be without Mario? Why a plumber decided to take everyone go-karting in the first place is a mystery. Why invite Bowser? Where's your helmet? Why are you still in overalls? Despite these weird and wonderful questions, families (well, the kids at least) enjoyed racing on a pipe-frame kart ever since the first game, Super Mario Kart. The 64 game got even more fans into the series, and this was largely because Mario was in the game and title. As an actual racer, Mario has been the average guy in every single game (as well as the green Mario), and Mario Kart Wii showed more of his personality by giving him a bit of an acceleration boost.

That's the end of my 'Shroom article, um, career? (Do I get my paycheque now?) Remember to keep racing and have fun as Link on the Blue Falcon soon this month with the new DLC. Oh, make sure you buy all the amiibo, because you're going to need those great costume for your Mii! See ya, and please watch out for the Spiny Shells. There's one behind you.