Hello. This month I'm going to be discussing the history of bad translations in old school video games. I have often viewed the notion that the Japanese transpose their L's with their R's to be an overly magnified stereotype. But many of them do make this mistake, due to the night-and-day differences of Latin versus tonal languages. For an English speaker to become passably fluent in another Latin language such as Spanish or Italian, it on average requires two years of devoted study. But a tonal language, such as Japanese or Chinese, will require at least six years of such study to be able to converse with any degree of adequacy. The inverse then, for a translation from Japanese to English, is evenly true. The translation, or transration of video game or any at all text from Japanese to English is indeed most laborious. But sometimes, poor translations can lead to great things. When Miyamoto created his Donkey Kong 1981 arcade, he picked up an English/Japanese dictionary and through it concluded that everyone in America and the entire English-speaking world would immediately correlate the name Donkey Kong to mean Stubborn Ape. 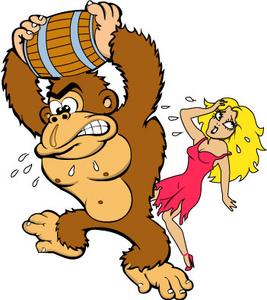 One excellent example of poor translation is the ending of one of the hardest games on the NES, but a very beloved one at that, Ghosts 'n Goblins. When Arthur defeats Satan, the following text pops up: "Being the wise and courageor knight that you are you feel stronghth welling. In your body. Return to starting point. Challenge again!" You have to beat the game twice to get the real ending, which is an even bigger slap in the face: "Congraturation. This story is happy end. Thank you." And who can forget A Winner Is You from the NES game Pro Wrestling? So remembered is that little slice of Engrish that native Engrish speaker Fawful uttered it in Bowser's Inside Story. The terrible NES Ghostbusters had an ending that went FULL Engrish: "Conglaturation !!! You have completed a grate game. And prooved the justice of our culture. Now go rest our heroes." "It's Dangerous to go alone! Take this" "THANK YOU MARIO! YOUR QUEST IS OVER. WE PRESENT YOU A NEW QUEST. PUSH BUTTON B TO SELECT A WORLD" Needless to say, empirical evidence dictates that the unintentional humor of horrible translations make them quotable and cherished by millions.

Words are not the only things that can be lost in translation. Symbols indeed have a power of their own comparable to language itself. Japan has a minority of faithful Christians, but no one there would get hot and bothered by Christian imagery appearing in games. This stands in direct contrast with America, where the companies took exception to allowing images such as crosses to appear in games. For example, in the original Splatterhouse, first for the Arcade and then the TurboGrafx-16, Rick had to fight an inverted cross monster. It was changed to an undead floating head in the American release.

Race is another issue that can get lost in transration. The Japanese live in a fully racially homogenous society. If you live in Japan, there is a 99% chance that you are of the Japanese ethnicity. They do not have near as many qualms about some racial stereotyping as Americans do. In the 1986 NES game Gumshoe, to name one example, the villains of that game were all savagely depicted American Indians. In the American release, they were changed to run-of-the-mill bad guys. The character Jim in the game Tom Sawyer for the NES had enormous lips and looked like a typical blackface caricature. As a result of this, no version was ever released outside of Japan.

See Next You Month

I hope you enjoyed my enumerations of when two great cultures collide. No one could ever have predicted how improper translations of Japanese video games do not annoy gamers, but quite the contrary, they are effectual of bringing forth effervescent feelings of laughter, nostalgia, and parody/references in recent Mario games. Which brings me to next month's editorial: The History of Video Game Nostalgia. Christmas is a great time to write such an article of this enigmatic chapter of video game history, when young gamers are unwrapping new gifts, and unboxing future nostalgic memories. 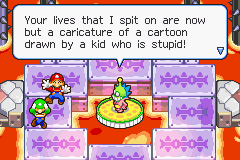