From The Mushroom Vaults

Well, hello there! Wait, what? You thought this section was dead? NOT ANYMORE, I say!!

In a more serious note, hello, readers!! This is Paper Yoshi (talk), the Pipe Plaza Director, with the first From the Mushroom Vaults section in a long looooooooong time. Will I write it from now on? Nope. Will I present you with a special guest section full of tips for your gaming needs? Yes!

I have wanted to write something like this for quite some time, and, after many issues, I got the perfect topic to write about; considering it fits FTMV, I decided to reboot this section, even if just for this month. Anyway, I believe I have blabbed enough about this, so let's get to the section proper. 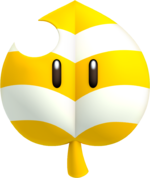 Tips for a game. Wanna know what game that is? Keep reading the section!

As of the time of writing this, I have been playing a certain game extensively for about a week. "What game is it?", you ask? Well, it's none other than the second Mario platformer released for the Nintendo 3DS, New Super Mario Bros. 2! As I was playing it, something bothered me at a specific moment during the game. Something every proud gamer would scoff at. Something that gets in the way of a perfect run. Something that, even while helping, punishes players all around the world. That "something" would be... the Invincibility Leaf.

Yes, it can help clear those seemingly impossible levels, or help beginners altogether, but, for the pro players, there's a very important prize at stake whenever the dreaded Assist Block appears: a 100% completion rate. If a level is completed by using the Invincibility Leaf, the player is unable to get shiny stars in their save file or unlock hidden levels by reaching a secret exit. That may potentially ruin 100% runs, so, if you want a perfect save file, be sure to stay away from those nasty blocks!

And then you ask yourself: "How can I prevent those blocks from even appearing?" Well, the answer is simple, but it depends on the problem that might eventually make them pop up when you least expect it.

Got a level problem? This is for you!

Some levels are extremely difficult, even for more experienced players, and beating them may require a good chunk of 1-Ups. If you keep falling into lava at a certain spot or dying at the hands of that pesky enemy, there's pretty much one thing you can do, and it comes down to a single word: practice. Use another file for the purpose of practising, watch a walkthrough video on your favorite gaming website, borrow a friend's game... In short, try to understand what to do and what not to do while going through the troublesome level, and apply the newly-acquired knowledge effectively to beat it.

But, for a perfect run, it's not about simply beating the level. There's more to it than that, and that's usually where collectibles come. Star Coins reappear in New Super Mario Bros. 2 after being featured in the first two New Super Mario Bros. games. There are three of them in each level, and, sometimes, trying to collect them all makes even the easiest level as hard as Tubular. So, if you wanna get those shiny objects without running into a single Invincibility Leaf Assist Block, I have a simple tip for you. First of all, if you are able to complete the level with no problems, do it. Collecting Star Coins in your first successful run isn't required at all, although getting one or two certainly helps you achieve 100% faster. After you clear the level, go back and try to get the remaining Star Coins. If you have already reached the secret goal, unlocking a hidden level, beating the level with White Raccoon Mario won't harm your progress towards 100%, so using the Invincibility Leaf is completely OK at this point.

The tips I listed here were mainly conceived from my own experience with NSMB2, so they might not be the most accurate ones out there. Additionally, some of them may be used in other NSMB games, depending on the features of each installment in the series. So, if you're having trouble with NSMBWii or NSMBU, try following one of those rules.

I guess that's all for this section, then. I hope you all enjoyed it, and I certainly look forward to writing more special issues similar to this one! Now go read the other sections!