by Post Damage Invincibility (talk)
Warning – This page contains harsh language, vulgar content. If you are offended by such materials, turn back now while you still can. 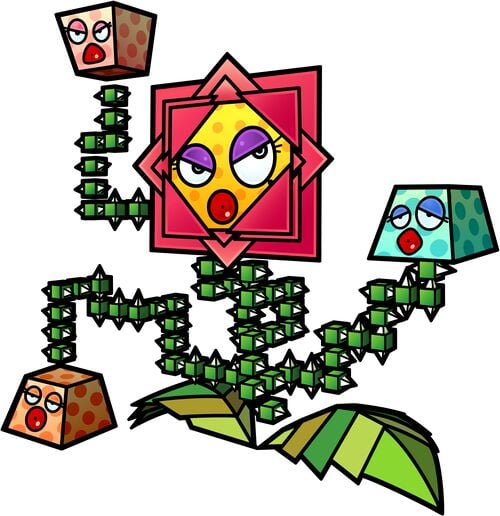 Vanity of vanities, all is vanity. -King Soloman, Ecclesiastes 1:2

What? Another character comparison of fuckin' plants in only two months? Oh God, here we go again. I'm going to be comparing the two most vain characters in the history of Mario's world. And you know who they are: They are both vain, conceited, self-worshipping, and... blossoms. They are, no doubt, King Croacus IV of Super Paper Mario, and Rosie of Paper Mario. Croacus IV comes from a long lineage. He is a descendant of Croacus I, the original King Croacus, known to his subjects more commonly as the Iron Rose. He basically united all the Floro Sapiens into one kingdom, the Flora Kingdom. When his son wilted, he went mad, corrupt, and tyrannical. This period is known as The Darkening. He was overthrown by his own daughter in a coup d'etat and he wilted. However, the Floro Sapiens of today still regard him as a hero, despite his descent into madness late in his life. Most of his rule saw great prosperity for the young kingdom he formed and benevolence from their great leader to whom they still owe very much.

King Croacus uses Floro Sprouts to brainwash the Cragnons into rebuilding his castle before trying to murder Mario and company. His philosophy is "Do as thou wilt". Until he does wilt, that is. No, even after... Lord, between Rosie, King Croacus, Piranha Plants... Murderous plants abound. It's sort of like Audrey II from Roger Corman's Little Shop of Horrors. Croacus is obsessed with beauty and all things worldly. The fact that he went crazy from drinking Cragnon-polluted water is similar to how monarchs of centuries old went crazy from drinking from lead chalices. He is sooo effeminate he makes Harhall seem like manly Heronicus. But, again, it is reminiscent of behavior of monarchs of old, who acted in such a manner due to being spoiled rotten from cradle to grave. His size is equal to his ego. To defeat him, use Bowser to fry his ass. Let's face it: Practically speaking, as soon as available, Bowser/Carrie is the best possible combination for any fight in the game, hands down, with the sole exception of Bonechill. Use Luigi. Once he is "dead", the Floro Sapiens will lament that he was a great and righteous ruler, and that it was all the Cragnon's fault for polluting the water supply.
Later on in the game, the game cops out on his "death" by somehow bringing him back. It's just like Luvbi. I guess the developers did it to not disturb little kids. But what's their fucking point? The kid might have gone days before finding out both characters were still alive, or they might not have revisited the chapters at all!

Next we have Rosie... You are my Posie! No, not really. She is a black-hearted bitch. It's like she is beautiful on the outside, but wickedly hideous on the inside. I have never heard of that happening before. I commend Paper Mario on breaking new grounds! Like one of the Three Hags in Super Paper Mario said, we love a flower because we know it will soon fade. She has a point, I mean, who ever loved a stone? Or a Cleft? But anyway, you won't love this rose! You'll want her to wilt! They say even the prettiest rose has thorns. She calls herself a Rose Spirit. So on that token, her soul protrudes from her stem. She and all plants in Flower Fields are rooted to the ground, so how the fuck do they even know each other? How many people can even see Rosie's beauty? Only people who go through the annoying hedge maze! How many have there been? So hah! If you seek someone more full of his or herself than Croacus, look no further. I need do no more than quote her so you'll understand how she lacks a scintilla of decency: "Oh, hello. I'm Rosie, a Rose Spirit. I'm ever glad to meet you. Please, admire me all you like. Breathtaking, aren't I? Aren't I just incredible? Really? I'm that beautiful? You're so honest and charming underneath that scruffy mustache. I like you. And because I like you, I'll show you this. This stone, isn't it beautiful? I found it just the other day. Some strange creatures on clouds dropped it. I couldn't resist it's gorgeous glitter, so I made it mine. I could look at it all day... Huh? What did you say? I should give you the stone? Oh dear... You're saying Lily's in trouble..." Fuck it, I'm through quoting her thorny ass. You know what happens. She knows Lily will die without and, and STILL will not give Mario the stone without giving her something more beautiful. If I were Mario, I would have given her something, but not a Crystal Berry! I would have stuffed myself at Tayce T.'s, thrown off my trousers, squatted over her while she remained unmoving (as she is rooted to the ground, therefore helpless) and given her some stinky, Italian-made fertilizer! Hah! Take that! It may technically be good for you and the grass around you, but let's see how beautiful you are when you're covered in shit! Oh, and the Water Stone's mine, bitch, there's not a damn thing you can do about it! Females such as Rosie have made entire civilizations fall! I swear, had Rosie not been a flower, she would have destroyed my faith in humanity! But she is hot though, you have to admit...