Hey you, yes you, slave of the web browser good reader, welcome to Mario Kart: Wheel Tips Corner. Your friend Coincollector is here to tell you something special. Recently I've discovered a nice invention to make this article a cliffhanger for the Mario Kart connoisseurs and amateurs... I call it.. Coincollector's Mario Kart Wheel Tips Corner Washing Machine (CMKWTCWM for short and with permission to use the patented name from another user to avoid charges). 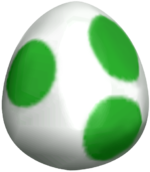 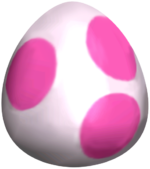 Today we will talk about Yoshi's favorite weapon, the 'Yoshi Egg. In Mario Kart: Double Dash!!, it's a special item exclusive to Yoshi. As for Birdo, his partner, she gets a similar object, but it's called Birdo Egg and has pink dots instead of green like Yoshi's. Petey Piranha and King Boo can use too them as they have the ability to get any special item and in this case, they only receive Yoshi's Eggs. Regardless of visual differences they act basically the same: Once thrown forward, they roll to home in on any vehicle in front of them and bowl it over, much like a Red Shell. However, unlike a red shell, when the Yoshi and Birdo Egg hit their targets, the eggs shatter, revealing three items that fall over the track. The items that come out can be Green Shells, Bananas or Mushroom, the most common items. Rarely a single Star or a Bob-omb will appear alongside the other two items. If you have hit an opponent with an egg, look carefully which items have been released. Sometimes the opponents you hit can get a chance to take advantage of any of the items that come out of the egg and fall in front of them, like for example, the Mushrooms. If an useful item appears from an egg, be quick and take it before your opponent can get it (this is effective if the vehicle you hit has very low acceleration, as the rival may have little chance to get the item before you can). But be very careful if a Bob-omb appears in the pack, especially if it appears in the middle. Eggs can also be thrown backward, but they do not home in and will roll in straight line. Like a Red Shell, the Eggs can be stopped if they hit another item on the ground, like the Bananas. This will cause the egg to break open and release the items. If an Egg hits another special item or even a wall, it also breaks, but there is a possibility that the items pop out in the opposite direction the egg was thrown. An apponent can also dodge an incoming Egg using powersliding. To do it, look at the Egg signal at the bottom of the screen that an egg is homing and listen the crack-like noise it makes when it approaches. Wait until the egg comes closer to the kart and appears on the screen. During that moment, try to drift and quickly perform a mini-turbo for a boost. In that way, the Egg will likely stop chasing you and instead will roll in straight line and get lost somewhere in the road to break itself eventually. A small disadvantage of the Yoshi/Birdo Egg is that if they don't find a target while rolling, they will shatter later and release their items. For experts, this can be taken advantage of if they are leading the pack, as it is common to obtain an Egg even in first place. In this way, you can get any convenient item (The Mushroom and the Star) that the egg has released without some rival having the chance to take them. All characters can get a Yoshi Egg in battle mode, but getting that item is quite rare, as it has the same properties as the Red Shell.

Hope you have enjoyed the CMKWTCWM of The 'Shroom. Be prepared for another random tip during this month, and the next one (maybe, I dunno... maybe not... I hope I don't get sued for using this '._.)