Hey, everyone, welcome again to Fake News! Guaranteed to be more fake than last month - no refunds.

We welcome Pyro (talk) (previously known as PyroGuy6) back to the team. He previously wrote for Fake Interview, and now has been hired for the Travel Guide.

Other than that, enjoy the section, and remember to pay your fee on the way out!

MYSTERIOUS CRIMINAL WREAKS HAVOC IN POSHLEY HEIGHTS AND BEYOND

Just yesterday, we arrived in Poshley Heights to take a look at the mythical treasure that was uncovered a short while ago. However, we saw some of the beautiful town in ruins. Pennington was on the scene for this compelling mystery. He said;

"Now, if only I had my dear Luigi to help me! He was quite the good detective..."

Damage reports have shown that multiple Shine Sprites have gone missing and someone left a giant table in the middle of nowhere. Also, the pasta stand is deep in debt because all their stuff is gone too...

Later, we received reports of a criminal leaving a giant table on top of Whacka. We interviewed multiple witnesses.

We have no idea what that means.

Pennington and his new assistant, Baby Luigi (although he said "The name's Squirps, squinkle!") are currently chasing the criminal in Rogueport, where he has left a massive amount of tables, most in ridiculous locations (mostly behind things, like a trash can).

Frankie, head of the Pianta Syndicate, claimed that the criminal also left tables on the Pianta Parlor's roof that were labeled "Blimp Ticket". The Safety Association of Glitzville has been informed of this, as Blimp Tickets are needed to get there. The Excess Express is also closed for "refurbishment", but we're pretty sure it was a victim of the table crime too. Chef Shimi has moved temporarily to stay with famous chef Zess T. He has announced that he will "prestair ~ i mean prepare a feast when the criminal is captured".

We will follow Pennington and Baby Luigi's discoveries, and we will report them next month. Goodbye!

Aren't the pigs the CUTEST?
Hey, everybody, it's Pyro, making my debut in the 'Shroom for the first time since when the "Guy6" was at the end of my username. But that's not the point. Today, I will be talking to you about the wonders of Twilight Town!

First of all, you might be wondering, "who would vacation at a constantly dark place?". Well, there's nice accommodations, a great shop (with a chest that curses you!), and a steeple that is inhabited by a freak in a sheet, known only as ????. Maybe you could guess his name, but don't try to; for some reason, it always comes out as "Dooliss" in front of him.

But then again, there's other things! The Twilight Inn, managed by none other than Darkly's brother, is one of the best inns in the Mushroom Kingdom. The beds are comfy, and you get a free peach that tastes very peachy. Or so they said.

The shop sells stopwatches, which come in handy so you can tell the time if you're lost in the forest. There's also some really thick syrup, and I once dipped my peach in it. It was great! I choked on it should tell Zess T. about it sometime.

The nearby forest is filled with cute Crazee Dayzees and strange green rocks. There's also a lot of Goombas that look like they're covered in moss. After getting through the forest (if you can), you reach the Creepy Steeple. This attraction is popular with kids 4 and under, so get a FastPass. Wait, this isn't Disney World. Never mind. It does feature friendly Boos, and Swoopers lurk here too. Many people come here for the legendary Golden Leaves. They're somehow edible, and DELICIOUS!

So, I've finally run out of things to say. Have a fun time at Twilight Town, and - Oh, what a lovely bell ~ Oink!

Hi everybody! Here’s your hostess, Chivi-chivik! And this is Cooking Guide, where we teach you how to cook excellent dishes!! So, let’s go! ---

Me: Here it is! Now, take ice cream cones and put the mixture in! Et voilà! You have delicious Shroom Cones!!
stage manager: Chivi, Dyllis has just called... she’s extremely angry.
Me: *frightened* ... ... ... 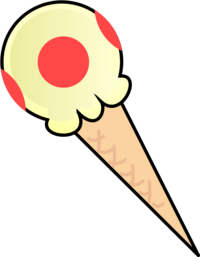 Thanks for reading. Until next time!! 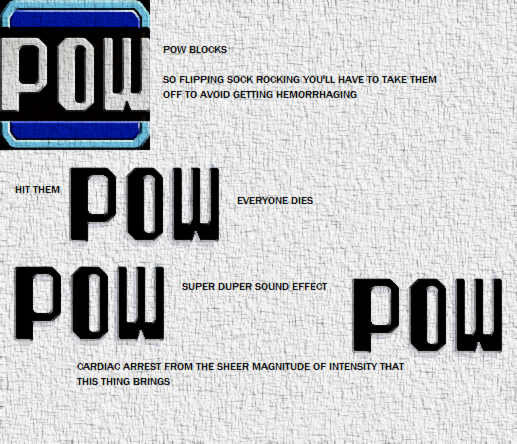 Good evening, ladies and gentlemen, for I say, I am TravixMan, Chief of the Mushroom Police Force, and Boy, I say, Boy, there's not many stories tonight. However, I have one story that is very crude for the Mushroom Kingdom.

One day, Mario and his friends were sitting outside, doing nothing whatsoever. However, Koopa Troopa and Shy Guy came with Chuckola Cola. Both creatures then gave the plumber and his friends the drinks, and Mario then proceeded to make lists of mini-games, and invited everyone he knew. Luigi was getting out more drinks for the party guests. Toad also helped, and invited Wario and Waluigi. Princess Peach approved of this party, and invited Princess Daisy, Yoshi, and Birdo. Bowser and Bowser Jr. came with Kamek, and also set up boards and mini-games of their own. When everything was complete, they started the party, wrecking property as time passed by. When the party was done, almost everyone left. Then many citizens came out of their homes, looked at their damaged property, and contacted the HQ. Then the Police came to the scene, and put everyone that was there under arrest. Trial for everyone will proceed soon, in the Isle Delfino Court Room, for the Mushroom Kingdom doesn't have a court room since Bowser destroyed it.

And that's all I have to say for tonight. See you all next month, on the Mushroom Kingdom Police Blotter.

'3K didn't receive any questions this month. You can ask him questions by sending him a personal message on the Super Mario Boards.