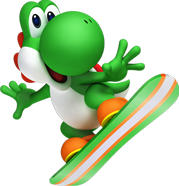 Hi, everyone. I'm sure your excited to read the sections for this month, so I'll make this short.

Currently, the only open section is Photoshopped Image of the Month. If you don’t want to write for this section, but want to contribute, you are always welcome to send me a drawing of yours that is related to the Mario series, so that I can add it into the next issue of the 'Shroom. So, if you want to write, have any suggestions, or have any artwork you want to show, feel free to contact me.

This month, I have this enemy from Mario and Luigi: Superstar Saga: a Tanoomba!

I saw this in a picture while I was browsing the article, and it reminded me of Tom Nook from the Animal Crossing series. Definitely one of the cuter Goomba variations, in my opinion. 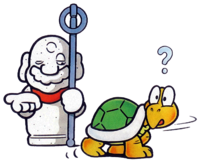 This Artwork of Statue Mario should without question be chosen as Character Artwork of the Month in honor of the extremely recent release of "Super Mario 3D Land". Many who picked up the game were pleasantly surprised to get to play as Tanooki Mario for the first time after two long decades. But many were shocked to see the suit's powers were completely different, akin to the Rabbit Ears in "Super Mario Land 2" than the special wonders of the suit they had first used many moons ago. It appeared to be an aping of the suit rather than the beloved suit itself. Only the attack was the same. He couldn't even become Statue Mario! Miraculously, after the Special World was unlocked and a mysterious gray leaf was picked up (Tanooki Mario now donned a red scarf as well), gamers around the world discovered Statue Mario did return in all his splendor when a ground pound was performed, a true magical moment among the many vicissitudes of the Mario series. And the statue's powers in this vast world had yet to be explored by the eager gamers.

Just a few days more to go to Christmas! This month I am going to present you a selection of snow-themed Super Mario music! From Paper Mario to Mario Kart 7, enjoy.

Relaxing, yet amazingly tense. Feel the coldness invading your Body, your blood runs cold. The sound effects are suggesting that it’s snowing, softly, not stormy.

I am always amazed how brilliantly Nintendo knows how to suggest to the player a beautiful snowy landscape, not only by graphics, but also by music. Especially soundtracks describing a special environment, snow, fire, water… are perfect examples.

Don’t you think the composers did a really great job on this one? This is by far my favourite soundtrack in the Super Mario Bros. series, concerning World themes.

Let me hear your opinion about this music. What do you think? It might sound weird and rather chaotic to you, there is no real, defined melody. It is mysterious, undecided, is it rather cheery or sad? We don’t know for sure, but I think this matches perfectly Rosalina’s character!

It perfectly matches the Happiness of the whole game. Yet another masterly rendered snow overworld theme. 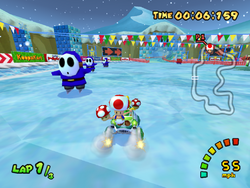 Hello, all. It's finally time for Christmas, and so I decided to celebrate by choosing a snow-related picture for this month’s Screenshot of the Month!

This large, high quality picture is from Mario Kart: Double Dash!! in the course, Sherbet Land. This track contains a lot of snow and slippery ice, and even Shy Guys that ice skate, as you can see in the picture. There's even more going on in this image. Most noticeably, Toad and Koopa Troopa are in the center of the picture racing their kart through the icy area. They both have mushrooms, which can be used to receive a short boost in speed. If you look at the map on the right side of the screen, you can see that Toad and Koopa Troopa are the only ones racing on this curvy track, so they must be doing a Time Trial. Not surprisingly for a Mario game, some of the structures, such as the tunnel ahead, in this picture seem to have eyes. There are also banners along the left side of the road, one of which that says "Koopa Kart."

That's all for this month! Thank you for reading, and I hope to see you again next month for the Screenshot of the Month!

I have received three sketches this month! If you have any drawings related to Mario that you want to show off, feel free to send them to me so they can show up in the 'Shroom’s next issue.

I now present to you two fantastic drawings made by Kingboo7 on DeviantArt, and another one by one of our fellow users, YoshiGo99 (talk):

By: Kingboo7
Title: For all your plumbing needs
This is an ad for Mario Bros Plumbing! 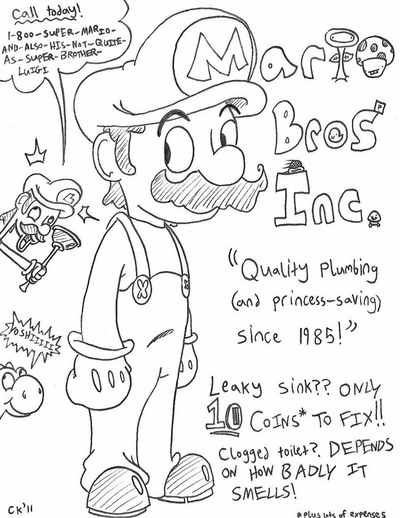 By: Kingboo7
Title: You'll never guess my weakness
This is another reference to the upcoming LUIGI'S MANSION 2 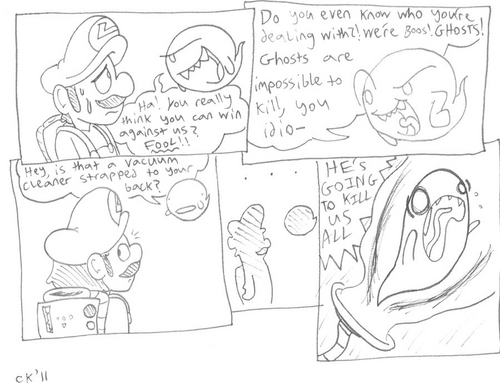 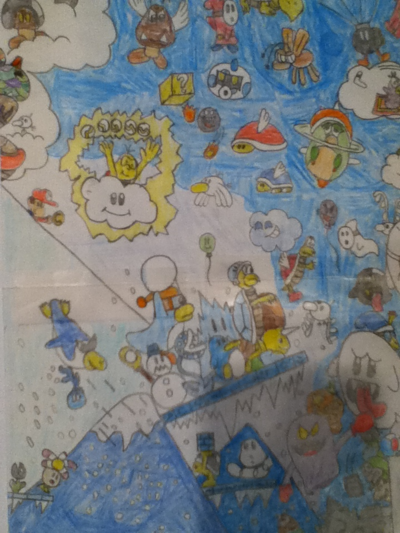