Welcome Mario Karters to the Mario Kart: Wheel Tips Corner. Your friend Coincollector is here to tell you the last tip of the year.

Before getting started, I would like to announce the world-wide release of Mario Kart 7 for the Nintendo 3DS. As we can see, Mario Kart 7 brings new gameplay to us, as usual in the series: Customizable vehicles, with the addtion of gliders to fly across the sky and propellers to navigate underwater too, and much more. Looks like many of you have got one, except for me, I don't have a 3DS, meh... And don't forget that our article of Mario Kart 7 is here to tell more about this game, techniques, secrets, modes and everything about the game in general. 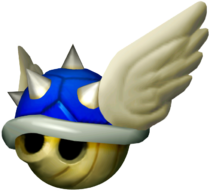 Spiny Shell, Blue Shell, Blue demon, Flying @#!$... Whatever you like to call them, it won't change its purpose in this life.

Now, ladies and gentlemen, I've kept this tip for a time until you needed it, and I think that moment has come. Yes, as you can see the picture, I'm gonna talk to you all about the Spiny Shell.

In my experience from playing and watching Mario Kart games, I've been investigating everything about this item, beloved by some, hated by many, to give you all the facts and secrets. I'd call this issue, the Science of the Spiny Shell.

The Spiny Shell, also called Blue Shell is a projectile that homes in on the Kart that is in front of it, much like to a Red Shell, basically. However, unlike the Red Shell, this item is made to chase the leader of the pack, that is, the racer in first place, and knock him or her over eventually. In every game that has been released, the Spiny Shell's function tends to vary a bit and I'll explain in detail what it does in every appearance.

The beginnings of a killer roadkill.

The Spiny Shell makes its first appearance in Mario Kart 64. The Spiny Shell can be distinguished by the spikes crowning the blue carapace of the shell and can be obtained from fourth to eight place (in rare occasions it is possible to get one in third). When a player gets one and uses it, the Spiny Shell slides all along the track in search of the racer in first place. The Shell makes a distinctive alarm sound when traveling, so the other drivers should take care too, because the shell will knock over any other driver that is on its way. Once the shell finds its target, the racer will be thrown to the air. Once the shell locks onto you it's almost impossible to avoid, specially if you're first. You can prevent from being hit by the shell if you use a boo to become invisible and so the shell go through you without making any harm, while those that are not in first can take the sides of the road so that the Spiny Shell will pass in the center of track without hitting somebody. However, the shell won't disappear if it doesn't find the leader yet and will travel all across the track to find its target. The best way to prevent being hit by the shell is using a Star. Not only does the Star make you immune, but you can also destroy the item if it attempts to hit you, freeing you from a painful fate. Additionally, if you get a Spiny shell, you can also drag the item behind you and use as a powerful defense tool. The shell never vanishes when you hold it behind and can knock over any rival coming after you and any homing item like the red shell for an indefinite time. Nonetheless, you need to be careful when you use it. If you reach the first place and release the item by accident, the Spiny Shell will turn around to hit you for being in first. Although its a very dangerous item, the Spiny Shell has a real weak spot in that it cannot trespass walls. If you're skilled enough, you can cheat the shell coming after you and make it hit the wall to bowl the shell over and stop its chase.

A fact of the Spiny Shell in Mario Kart 64 is that the shell cannot be thrown backwards. Once launched, it always goes forwards. Additionally, in Luigi Raceway, there is an Item Box hanging below a balloon. If you pull off taking it, you'll always receive a Spiny Shell. The same thing happens in Koopa Beach where a lonely item box lies on the top of a big stone that can only be reached if you jump from a very narrow and steep ramp.

The Spiny Shell also appears in Mario Kart: Super Circuit and its function is essentially the same as in Mario Kart 64, except that it can be dropped backwards. in this way the shell remains motionless until the player in first place passes near to it to activate the item and stop it in a wild spin. However, that way doesn't work for a racer in first place and instead he or she will be instantly hit by the released shell. 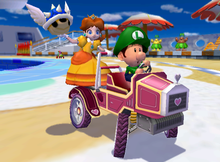 Better get one at last and keep it safe from careless hands.

In Mario Kart: Double Dash!! the Spiny Shell gains a pair of wings that make it more efficient and even more dangerous. It can now skip any obstacle found in the track and is virtually indestructible by other items or objects. With this new appearance, the shell also shows a radical change of its function: It no longer chases racers from other places, only the racers in first. The Spiny Shell can be obtained from fourth to eight place and once released it flies along the track at flashing speed to find its target. The screen usually advises racers that a spiny shell is coming from behind, and it can be identified by a hissing sound that the shell makes when it approaches (yes, a hissing sound that, just thinking of it, makes everybody shiver). Once it finds the leader, the shell flies behind the kart to home in right after and blow the drivers up in a blue explosion. The explosion will make the drivers fly, much like in Mario Kart 64, and with that, drop all their items over the road. The explosion can also trap nearby drivers from other places, sending them to fly or spin out of control, or even be hit by the items dropped by the victims that were blasted. As I said before, the shell will home in on the drivers that are in first place, but if the driver in first reaches the finish line, the Spiny Shell will then find the active leader of the group, that is the driver in second place, or else the ones in third place, and so on. Avoiding the Spiny Shell in Mario Kart: Double Dash is not quite easy but it can be done using certain means. One of them is dodging with powersliding. However, you must be precise and you need to be an expert of snaking. If a Spiny Shell is homing in on you, try instantly a drift and make your kart shows the blue sparks to release a mini-turbo. When the shell is flying behind you and about to charge release all the buttons to perform a mini-turbo. An important piece of advice: You need good timing to release the boost and dodge the shell successfully, or else the shell will keep following you. If done correctly, the shell will fly away without chasing you and explode somewhere on the track. As I said, it's not easy and this move does not always guarantee that you can dodge all the Spiny Shells that can appear. Other ways to avoid the Spiny Shell are far common and easier to do. The most obvious is using a Star, if a Spiny Shell is attempting to hit you. The other is to take a extreme boost to avoid the blast of the item. This is sort of rarer than the mini-turbo as none of the items that grant speed will work to avoid the Spiny Shell. In these conditions, the only objects that save you from a homing Shell are the DK Cannon of DK Mountain, or the air pipe of Rainbow Road. Personally, I've managed to avoid the Spiny Shells with a combination of Stars or Mushrooms with mini-turbos to simulate the speed gained from these means in other courses, although that usually works if the Spiny Shell charges at you from a distance. Another way, but not a recommended one actually, is to get off of the road (for example falling to a void). The shell will ignore you while falling and fly along the road. In some courses, though, the shell is able to "wait" and find you as soon as Lakitu takes you back on the track.

I have other facts about the Spiny Shell from Mario kart Double Dash!! that might help you to know how to deal with them. First, don't get hit by another item, or fall from great heights or spin out of control if a Spiny Shell is behind you. For example, a spin and an explosion make things worse, as you may end up facing in the opposite way of the road. Second, don't be always in first place, specially at the start of a race. Try to be in a lower place for the first seconds if someone gets a Spiny Shell by taking the first set of item boxes of a race course. Third, try to start in a lower place and try to get a Spiny Shell from an Item Box. In this game, a player can get one easily and when you get it, none of the other drivers can get another Spiny Shell unless that one is used and has exploded over its target. Actually this can be another way to avoid the Spiny Shell. Fourth, if you have one, don't use it if you're in first place! You know why... And fifth, enjoy having that toy, but use it wisely. I recommend you use it at the very last moment of a final lap to see what happens.

Thankfully, the Spiny Shell is not available in Battle Mode.

And now some funny facts about the Spiny Shell. The shell is known to be almost unavoidable, but what happens if the item fails? In a race through Dino Dino Jungle, a Spiny Shell was after me, making its ominous noise while I was crossing the bridges of the lake until a sudden Lightning strike hit me. Right after that moment the Shell stopped making noises and disappeared once I entered the cave... What could have happened? I really dunno, but I never saw it again. If you have a Spiny Shell and you're close to finishing a race, throw the Shell while you cross the finish line and something funny will happen. The shell sometimes will go in the opposite direction and hit the racer in second place. However, despite of its bad reputation, the Spiny Shell becomes useful to do a shortcut in one track of the game...

And that's all, Shy Guys. Yeah, due to the length of this article, this issue will be discussed in parts. For now, you've read the first part of the Science of the Spiny Shell, so look forward to the next part that will have more information about this item and its other appearances.

I hope all of you nice readers enjoyed reading the tips of the Mario Kart: Wheel Tips Corner of this year. The 'Shroom and your friend Coincollector wish you happy holidays and a happy new year!