From the Super Mario Wiki, the Mario encyclopedia
< The 'Shroom:Issue LV
Jump to navigationJump to search

It's time for another month for the 'Shroom! I hope you enjoy all that we have to offer.

Again, no one was hired to write for the Music & Artwork this month. If you would like to write for it, please fill out the following application and send it to me (open jobs are listed here). Just remember that the demo you have to send must be as good and detailed as you can possible make it.

2.) The staff reserves the right to remove writers from their position if they engage in activities that reflect badly on The 'Shroom. These activities include extensive misbehavior on the Super Mario Wiki and/or its forums. Do you agree to not engage in such activities for the entire duration of your employment?

3.) Please write a full-length demo of your section. That way, we can have a bit of your work to decide if you can be on the team.

I am currently accepting pictures for the Music & Art's Sketch of the Month. If you have any drawings related to Mario that you think should appear here, send them to me and they'll appear on the next issue of the 'Shroom! 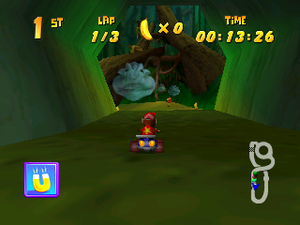 I spent some time wondering what I would choose for this month's Screenshot of the Month. I knew it would be a dark and spooky picture for Halloween, but I wasn't sure which one. As I began writing this section, a family member kicked me off of the computer and I went to play Diddy Kong Racing. While I played the said game, I was inspired to choose a picture from Haunted Woods, one of the game's best courses.

It is a pretty eerie track, which takes place in a haunted, medieval village and in the woods. In one point of the race, you enter a creepy forest, and as you drive through it, several ghostly Wizpig faces appear and laugh in a strange way. This screenshot is taken at that point. You can see two of the faces at the front of the picture near Diddy Kong and Conker, as well as another in the distance. In the bottom-left corner of the image, a yellow magnet is displayed, which happens to be the item that the player is holding. The magnet can be used to pull you towards other racers during the game.

As shown in the picture, the player is on their first lap and in second place, right behind Conker. Their time so far in the race is displayed in the top-right corner of the screen. The player is also shown to be holding seven bananas. Bananas are scattered around many of the game's courses, and collecting them makes you drive slightly faster. You can see a few bananas ahead of Conker and Diddy Kong in the picture. There is also a red balloon in the distance, which, if hit, gives the one who hit it an item. The color of the balloon corresponds to the type of item you get from it. Therefore, if someone were to drive into that balloon, they would get a rocket to launch at an opponent.

That's all for this month! Come back again to see next month's Screenshot of the Month!

This month, I have received two sketches related to Mario! If you have drawings you want to be shown on the 'Shroom, send them to me and I'll put them here, if you'd like. You are also free to give me a title and description along with your picture.

Our first drawing is by Rise Up Above It (talk): 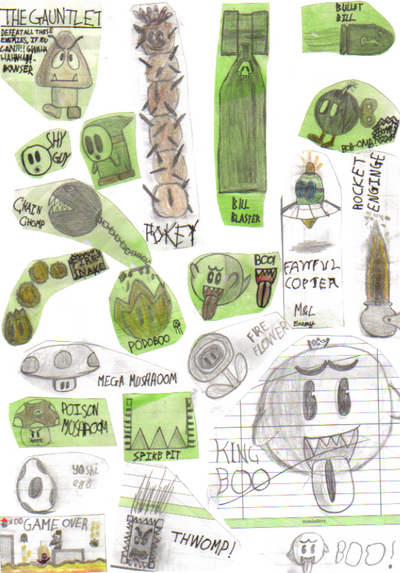 Next, we have a picture from Kingboo7 on DeviantArt, entitled "Welcome to Your Mansion." It is a picture to celebrate the release of Luigi's Mansion 2: 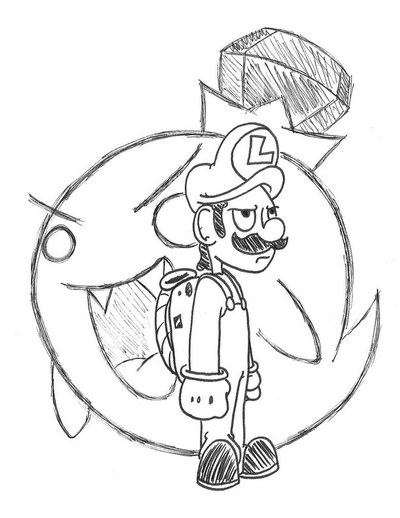 Come back next month to see more great drawings from the community!

This month, I’m going to present you five orchestrated versions of different “Mario Classics”! From Super Mario Bros to Super Mario Galaxy and New Super Mario, I guess something will certainly fit your taste. But it is highly recommendable to listen to every bit of those excellently rendered Master rearrangements for orchestra. Enjoy!

A more dramatic version of the Game’s main themes; overworld, underworld, castle. Feel the tension and the greatness of this more Mario-unlike interpretation.

One of my personal favourites! This rearrangement of the game’s soundtrack is masterly rendered, first and foremost because of the vocals, in both the overworld’s and the castle’s themes. It puts a smile on your face, enjoy it deeply!

The WDR orchestra in Cologne gives us this beautiful interpretation of old Mario soundtracks, written by Koji Kondo, starting out with a gorgeous violin cover of Dire, Dire Docks that makes you shed tears of nostalgia. Another soundtrack they play is a lively and energetic cover of the Super Mario Bros. 3 theme, a SMB underground/ castle theme variation , New Super Mario Bros’ main theme and, of course, the Super Mario Bros. overworld theme.

Take a look inside the wonderful world of the ‘Galaxy’ soundtrack! It is not only an amazing orchestration, but you will relive the whole story just by listening to the music. Starting out with the Star festival and Bowser’s appearance, we get an impression of the most well-known Galaxies in the game; Good Egg Galaxy, Battlerock Galaxy, Buoy Base Galaxy, Gusty Garden. Finally when we are facing Bowser, the villain’s theme plays, sung by a choir! At the end, you will be stunned by an outstanding choir and orchestra version of Gusty Garden, in Latin! Veni, vidi, vici! Fitting words for our heroic plumbers who came, saw and conquered space.

That’s all for this month, I hope you enjoyed my article. :)

For this month, it's this picture of Bowser Jr. :

! This is from Mario Hoops 3-on-3, where Bowser Jr. is a starting player, while his father Bowser is an unlockable player. It'll be a little bit before Basketball season starts, but here is this image for fans of Mario Hoops 3-on-3!

Hey guys (and girls), and welcome to October's Soundtrack of the Month! With Halloween coming up for many, I feel that it's more than necessary to use a "spooky" song. So here's the Luigi's Mansion theme from Super Smash Bros. Brawl, extended to play for 14 minutes. Happy Halloween, everyone! 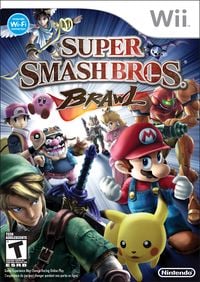 "Super Smash Bros. Brawl" is the latest installment for the Smash Bros. series, providing even more action-packed events taking place this time around. First glance is just regular old characters intermingling with new characters. However, it is much more.

Those characters on the cover - Link, Mario, Peach, Samus, Pokemon Trainer, Pikachu, Kirby, Fox, Pit, Meta Knight, and Wario - need a closer look. See the titles that lay out on every character; the fine stitching of both Link and Mario's clothing, the Master Sword handle in full detail, even the feathers and bat wings of Pit and Meta Knight respectively! Not only that, but with that blue background with the white coloring coming from the background like the sun, it makes the effect even better. Without that effect, the cover wouldn't have made that 3D effect that it does. It's pure amazing what Nintendo did to this simple design.

It's not that complicated like the others, so that is basically all their is. However, I think that did the balance perfectly. With that, I'm Baby Mario Bloops and I'll see you all next month!