Welcome, Mario Karters, to another issue of Mario Kart: Wheel Tips Corner. Your friend Coincollector is here to tell you the tip of the month. 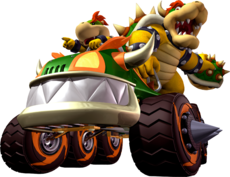 Green hood of evil, mean face on the front to scare players off of the road, spike hubcaps, six wheels for extra speed, fiery leather seat on the cab for comfort. I wonder how many coins Bowser spent to make this. And watch out when using it, its stats are also "evil".

The tip of this month will be all about one of Bowser's personal karts seen in Mario Kart: Double Dash!!, the almighty Koopa King. An evil kart aptly designed (and named) for an evil character like Bowser. The Koopa King has a body with a stylized design that shows Bowser's most notable features, especially the front, with those menacing big sharp teeth, horns, and bright eye headlamps (which are obviously decoration and are never seen working in reality). The kart also is unique in having six wheels - although it's not the only in this game. Let's continue with the stats that appear in the game:

Looking at its stats, the Koopa King can be regarded as the most challenging when playing with it (and even playing against it). As a heavyweight type vehicle in MKDD!! the Koopa King boasts great speed and weight, arguably the greatest compared to other vehicles, as in the game, these two features have five stars. The only thing that contrast these advantages is its acceleration, a single star. The Koopa King has by far the worst acceleration in the game. This can become problematic when the kart is hit by an item or obstacle. It requires several seconds to recover the speed, but the worst thing is that while you try to accelerate you can be an easy target to be hit by another item again, due to the kart's large size. The only way to regain the speed in less time is to make a mini-turbo. It can be difficult to perform one, though. The vehicle tends to be useful when racing on long courses like those of the Star or the Special Cup, as the speed can give you the advantage to be far ahead of the opponents and their attacks as you progress in the race, and while counting the weight of the kart, you can also push some light vehicles away and if given the opportunity, send them off to the edge of the road and fall to the void. On the other hand, It's not recommended to use in short courses and intense races like those in the Mushroom Cup. This kart can be, however, very useful in time trials.

And so we end with another tip of the month, Shy Guys. See you the next month with more here in the Mario Kart: Wheel Tips Corner of The 'Shroom.