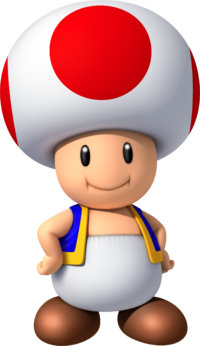 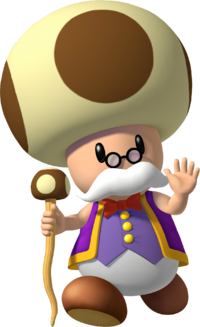 Hi, I'm Mario304 and I'm back with my first Character Comparison in two years! Man, it's been that long. Anyway, today I'm comparing two loyal servants of Princess Peach. They both get a little worried about her, they are loyal advisers but what sets them apart? I think it's time to compare both Toad and Toadsworth. Let's begin!

Toad is a small mushroom citizen with a diaper. Like all Toads in the Mushroom Kingdom, he wears brown shoes and a hat. On his hat are some red spots and he also wears a blue vest. This vest, however, sometimes makes him easy to distinguish from the other toads.

Like Toad, Toadsworth is a small mushroom citizen with a diaper. Unlike Toad, however, his physical appearance is unique compared to him. He does wear brown shoes, but he also has a brown hat with dark brown spots. He wears glasses, has a cane that he carries around and also has a beard.

In his early appearances, Toad was a helpful NPC who gives tips and items to Mario throughout his adventures. He would even be a playable character in some games, such as Super Mario Bros. 2. As time went on, his appearances as an NPC became stale and he is now a playable character in some spinoffs. Who, however, took over his NPC role in the more recent games now? Hm...

In his first appearance, 2002's Super Mario Sunshine, Toadworth was an advisor to Princess Peach and is constantly worried about her. He doesn't do much in this game, though as he mostly stands around worrying about Peach after she is kidnapped. In his most recent appearances, though, he begins taking over Toad's role as a helpful ally who gives Mario tips and items. He has only made two appearances as a playable character, though.

Toad is a humble friend of the Mario Bros. and Peach. He loves helping them whenever they are in need of it and he never gets angry. He tends to get scared at times though and he worries little about the princess when she is captured. However, his humble and excitable personality always makes him thrive to help the bros. whenever they are in need of it.

Unlike Toad, Toadsworth is more worried the princess when she gets captured. Usually when this happens, he begins to weep and shout, wanting the princess to come back. Even though this gets annoying, he is a very kind and caring character, wanting to help the bros. by giving them tips in some games.

Now I shall tally the points and see who wins this character comparison! Here are the results:

Winner of Physical Appearance is: Toadsworth! Winner of Games is: Toad! Winner of personality is: Toad!

So our winner is:

TOAD- "Our princess is in another..." Quiet, Toad! I didn't ask you to speak! Sorry about that. Anyway, yes Toad won. Why? Well Toadsworth may be the new advisor of the Mario Bros., but Toad has more to offer than him. He appears in more games, some as an NPC, some not. His physical appearance may not be in a lot of detail as Toadsworth, but Toad has a fun personality and he appears in cartoons and comics. So, Toad won! I hope you all had a great time reading this! See ya!