The 'Shroom:Issue 64/Fading Into Obscurity 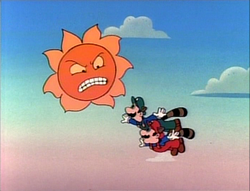 Grrr, it's the Angry Sun.

You feel the searing heat, it feels as though the sun is swooping down behind you, you're so hot you think you can die, you're an average citizen in the year 2012. Or you're Mario, being chased by an Angry Sun.

Welcome to another issue of Fading into Obscurity! I don't usually review enemies, but it's technically within my coverage. So, for this lovely, incredibly hot, day of July (the forecast for today hasn't actually come out, I just know it will be incredibly hot), I thought I'd shed some light on this source of heat (light, heat, sun, get it?!?).

The Angry Sun is mainly a character in The Adventures of Super Mario Bros. 3, a TV series from 20 years ago. That was also around the time of its first and only appearance in a Mario-series game, Super Mario Bros. 3. In these two things, the sun is basically a moving sun that tracks down Mario and tries to hit him. In the TV series, it is shown that this sun has anger management problems, however after one episode where it attacks Mario and Luigi, we really don't hear much about it. I guess it has simply faded into obscurity, now if only our sun would do the same...