How do I download .ogg files on this site?
The preceding unsigned comment was added by NintendoFan369 (talk).

Should I put this 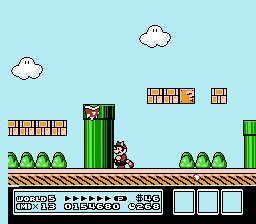 in the "Shell in the Wall" glitch?

I was playing on real hardware and broke a block with a shell that went off screen to the left. It broke a environment block of the middle of a big bush that was just appearing on the right side of the screen. Instead of the bush it was the sky/background. I saw the block explosion animation on the bush. I'm not going to add this to the main page because I've only encountered it once but since it was on real hardware I thought I should post this. If this is replicate-able add it to the main page. I was running towards the right as well.

Hi, I have found one glitch that it's not on the list, how could appear in it? Has to be by a mod/admin? Thank you.

By The way, I don't understad why The users can't edit articles. This is worst to The content because The articles can't be longer with new info. Hagun (talk) 06:56, 15 November 2018 (EST)

You need to be autoconfirmed to edit semi protected page, upload files, create your userpage, and pages. --

At the brick section of 5-tower, a brick block wall can be found, with a super leaf (p wing is easier) Mario/Luigi can go above the bricks, you can find a 1-up, if you decide to make a hole in the wall using the tail, and jump, you can hit some off screen bricks, this causes the broken pieces to appear from the bottom of the screen, as well as this, the exit pipe in the same area has bricks above it that Mario/Luigi can brake, making the pipe look like it's from a bad Super Mario Maker level.
The preceding unsigned comment was added by Gold Yoshi (talk).