It's a bit weird that they named him King Dedede on the German version of the Dojo!!, while his correct translated name is "König Nickerchen", also seen on the Melee trophy. :S - Cobold (talk · contribs) 07:59, 25 October 2007 (EDT)

Er, why are you saying this? My Bloody Valentine

Ummm... This is probably just me being stupid, but where (Officially) does it say he can multi jump? Was this at E for All? Sorry if this is a stupid question... Infectedshroom

Alright. I just think this site does a little too much assuming. Oh well. Infectedshroom

Yeah that is a little too much assuming it could be a trick of it's own(kinda like Peach's or even gliding, but I'm pretty sure he has some type of special jump. - Pikatwo

Correct me if I'm wrong in assuming that this is his entrance. I doubt it's an attack anyway, and I assume that Waddle Dees carrying him in would be obvious enough, but if we need more proof, I'm fine.

I was flicking through various Kirby articles and stumbled across this one, its a good little beast, but i feel the picture is a big spoiler. I hadn't known intill now that Dedede was evil and had captured Luigi, Peach and Ness (thats what i egt from the picture). Bare in mind Austrailia and Europe havn't got the game. - User:DancingCyberman

It has the Spoiler template. We are an encyclopedia, we can't just remove content because it could "spoil the game for those who haven't got it". Dude, remember, a LOT of people don't even HAVE a Wii, they'll get spoiled. They might never get the game ever, so spoiler content will always be a concern to them. Do we worry about THEM? No. I myself am Australian, and I oppose the idea of removing spoilers because another Country "doesn't have the game yet". It's not a good idea... My Bloody Valentine

I don't suggest to remove the spoiler article, it is labeled, but pictures are harder to avoid. - User:DancingCyberman

We try to be as sensitive as we can to people avoiding spoilers, but sometimes they are unavoidable. How can we provide information about a game that hasn't been released without spoiling anything? The fact that Dedede is in Brawl could also be considered a spoiler. I recommend not reading this page until you have gotten the game yourself.Knife (talk) 17:25, 30 May 2008 (EDT)

How could we input this INSANELY awesome picture into the article?: 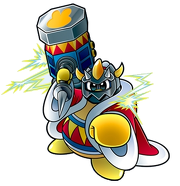 It doesn't say whether King Dedede starts out good or evil in the S.E. He could've attacked Luigi to help Tabuu achieve his goal, or to save him from Wario.

I just got this from a friend, but he says King Dedede looks a lot like a Delibird from Pokemon. Press

to whack Toad upside the head.